As a writer of historical romance, Annie Burrows spends a lot of time doing research.  She tells us she needs to know as much about the period in which her characters lived, if she wants them to come alive on the page.  From now on, each month Annie will be telling us about some of her research... 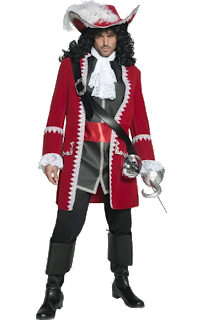 OK - I admit it - calling it research is really an excuse for having days out to all sorts of fascinating places, usually involving tea shops and the consumption of scones!


My latest research trip took me to Eton College, because most of my heroes, as members of the British aristocracy, would have been educated there.  (As were other famous fictional characters James Bond, Bertie Wooster, and Captain Hook!)


The school was founded in 1440 as a charity school to provide free education for seventy poor boys, who would then go on to Kings College Cambridge. Though nowadays we tend to think of Old Etonians as people from very privileged backgrounds. 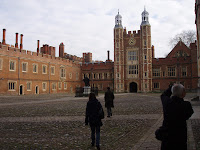 (Statue of founder in central quad - scholars today still keep up the tradition of passing the statue on their right, so that their heart is towards their benefactor) 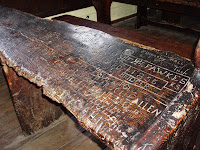 The walls of Eton are covered in centuries of graffiti, proving that boys don't change, whatever their station in life, or the century in which they live.  The desks in the oldest of their classrooms show just how determined some boys are to make their mark in the world.


The teachers, or "beaks" may well have left their mark on the boys, too.  Flogging was common.  The headmaster who was in charge from 1809 - 1834 (and therefore of most interest to me) once flogged eighty boys on one day alone - which by my calculation was about a quarter of the boys then present.  Ouch! 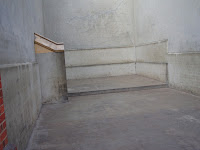 My heroes would have played games known only to scholars at Eton, such as "fives", on a court like this:

(looks a bit like a squash court, but you don't need a bat!): 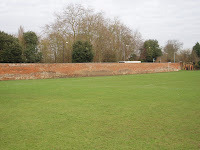 Or the "Eton Wall Game" - which is apparently a precursor to rugby. 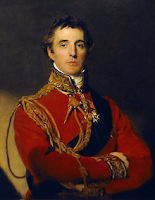 Real Regency men who attended Eton include Beau Brummel and the Duke of Wellington.  Wellington is famous for having said, while watching a cricket match in which Eton scholars were playing, that "there grows the stuff that won Waterloo."


The school still has the reputation for turning out the kind of men who will rise to the top.  Our present prime minister David Cameron, as well as his deputy Nick Clegg are both Old Boys, as are many leaders of countries around the world.  The school is such an integral part of British heritage that the staff have to accept that they are working in what has become a tourist destination.  The pupils have to put up with having their photos taken as they go to lessons.

I thought this was a bit intrusive...but then again, perhaps it's a good grounding for future lifestyles which may well include being followed by paparazzi!

Posted by annie burrows at 02:00 No comments: