On the Loose at the RNA Conference!

What's the collective noun for a group of Novelistas Ink members?

An invasion of Novelistas seemed appropriate at the RNA Conference 2014, held at Harper Adams University in Shropshire. Almost half the group were present, and our enthusiasm upon arriving probably made up for the members who couldn't be with us. We were all determined to make the most of our time there, whether we were veteran conference goers or complete virgins like me. I possibly overdosed on coffee simply because it was there, on offer, without my having to get up from my desk and switch on the kettle (too much effort at times). So I must have been on a caffeine high during a number of talks and workshops, as I'm still trying to make sense of my notes.

I asked a couple of the others for their own views on this year's conference, and here are a few more photos they've shared with me...

Did you know this area still holds the UK record for being the coldest spot in the UK? (26C!) But not when we were there!

The conference was well organised and well attended. Goody bags spilled over with books and other items. Delicious, locally sourced food. Great company. I talked too much and listened a lot. I was impressed by the lecture theatres. Friday and Saturday's talks and workshops mostly centred around e-publishing and the future of the industry. I found these fascinating.

However it was Sunday's talks that grabbed me the most; they were more 'hands on' and centred on the nuts and bolts of writing and publishing. I particularly enjoyed the practical workshop during Kate Long's talk. We were asked to fill in a questionnaire about the main character in our books. Amazing! I didn't even know up until that point that my character had a plain pink bedroom as a child. It helped to know your character in more depth. It's definitely something I shall use.

Annie: 'For me, going to the RNA Conference is about re-connecting with friends I only chat with virtually over the year.'

After my first conference, where I came back exhausted, I've learned not to try and go to every seminar and stay up late chatting every night over a bottle of wine! I pace myself much better, and enjoy networking with old (and new) friends, hopefully gleaning a nugget or two which I can apply to my writing over the coming year. And I never learn what I think I'm going to learn. Never!

You can read Juliet's post here on the blog, where she tells us all about the Blists Hill event on the Friday morning, and Jo - an experienced conference goer, who always meets up with friends there - enjoyed the fact the Novelistas blended so well into the established circle.

For me, one of the highlights was seeing the Novelistas Ink Blog on a screenshot, on the huge screen in the largest lecture theatre, during Ian Skillicorn's workshop. Although we knew we were going to be mentioned, we were so stunned when we saw it up on the screen we forgot to take a photo of it to show the others. #EpicFail.

I'm sure one day soon I'll be blogging about things I learned at the conference. I'll decipher my notes eventually, and my head will stop spinning. But I do know one thing now - it wouldn't have been the same without my brilliant Novelista friends to share it with.

Thanks for being there. (And for the camomile tea at midnight, Juliet! Much appreciated.)

Posted by Valerie-Anne Baglietto at 00:14 No comments:

Blists Hill and the RNA Conference 2014 by Juliet Greenwood

This year was my third RNA Conference. My first was many years ago in Durham as a new writer, wide-eyed and bewildered, and astonished that everyone was so friendly and writers weren’t all impossibly rich and glamorous and Hollywood and looking down their nose at me! I never thought then that in my next Conference (two years ago in Penrith) I would be giving a talk myself as a published author. This year, I enjoyed meet up again with all my lovely friends in the RNA, meeting all the new ones made online, and learning more about the changes taking place in the publishing world.

With fellow Novelistas Annie Burrows and Freda Lightfoot, I also had the chance to go to the author’s event at Blists Hill, the reconstructed Victorian village in Ironbridge. We all had a great time with plenty of interesting chats with visitors passing by on their way into the village. In my costume as a suffragette, I found myself part of the exhibits when I went to look around. The policeman on his bike looked slightly confused and pedalled away quickly, but I had some interesting conversations about brick throwing and universal suffrage with the visitors. It was a glorious summer’s day, and I definitely felt myself entering the world of ‘Lark Rise to Candleford’. My glorious hat with the ostrich feathers is now safely packed away – all ready for its next appearance!

Friday was our Summer Party. We also celebrated the publication of Sunlounger 2, an anthology of over 40 short stories, including stories from Valerie-Anne Baglietto and Louise Marley. You can read about Valerie-Anne's Sunlounger experience here.

Juliet Greenwood baked her famous seed cake for the occasion. You can find the recipe for it over on her blog. Juliet was also celebrating two of her books reaching the Amazon Top Ten last month - Eden's Garden and We That are Left. You can read about that here.

Trisha Ashley reached the Top Ten of the Sunday Times bestseller list with Every Woman For Herself.

Thursday saw the publication of Anne Bennett's latest book, A Strong Hand to Hold. You can read about the inspiration behind that story here.

Finally, June Francis has two books out in one volume this month with Maiden in the Tudor Court.

So you can see, the Novelistas had plenty to celebrate!

Posted by Louise Marley at 18:57 No comments:

D is for...Discipline by Annie Burrows


Annie Burrows is writing a series of short articles about the things she's learned since becoming a published writer.  And presenting them in alphabetical form, for some obscure reason known only to herself.  This month she's reached the letter D...


I get a variety of responses from people when I tell them what I do for a living.  From those who are thrilled, saying they have never met an author before, to those who roll their eyes and say, "Oh really?  I wouldn't mind writing a book, if only I had the time."
My answer - If you want to write a book you have to make the time.
It isn't easy.  When I first decided to write, I had to start making Difficult choices about how to spend my time.  Not only "free" time, either.  I deliberately chose jobs that wouldn't tax me too much, so that when I did have "free" time I wasn't so drained that my mind wouldn't function.

This meant taking reception work, cleaning jobs, or driving jobs, so that even when I was on the clock for someone else, my mind could still keep working over plot points.  Then, when I did get home, and had fed the family, and generally tidied up after them, I could go and write down what I'd been Dreaming up all day (when I should have been answering the phone/unloading cartons of sweets/stocking up shelves with greetings cards). 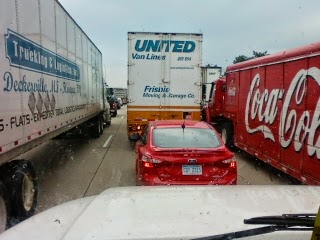 Some of my best ideas have come to me while I've been stuck in traffic jams on the M56 with nothing to look at but the tailgate of the lorry in front of me.
(Trucks to the right of me, trucks to the left...here I am stuck in the middle of the queue...with apologies to Stealer's Wheel)

D also stands for Determination.  It took me over ten years from deciding I could write a book (ok - rather in the manner of those people who annoy me so much now by assuming it is easy) to actually getting a publishing contract.  And during those years I went through a huge spectrum of feelings about my ambition.  From belief and hope, to despair and self-loathing.  There were times I couldn't even walk into a bookshop, and see all those titles sneering at me from the shelves by people who'd managed to do what I couldn't.  It simply hurt too much.

Eventually, I went on a writing course (what - didn't I do that first?  No.  I was just as deluded as all those other people who assume they could just sit down and write a bestseller without any training at all.)  By then I was starting to wonder if I was flogging a dead horse.  What if I really didn't have what it took to be a published author?  Was there a good reason why all I was getting was rejection slips?  I finally decided to fork out some of the money I'd earned delivering sweets to village post offices, to go along to my local college and see if I could learn anything from a qualified teacher of writing.

And then, if I got yet another rejection I decided I would send my next manuscript to the Romantic Novelists Association New Writer's Scheme.  Because I discovered that they would have a published novelist read my work and actually tell me what they thought of it (unlike publishers, who were just sending back standard rejection letters which gave me no clue where I was going wrong.)

You can see where I'm going with this - even after ten years I just wasn't prepared to give up.  I was going to do whatever it took to see one of my own books on the shelves of W.H.Smith with all those others. 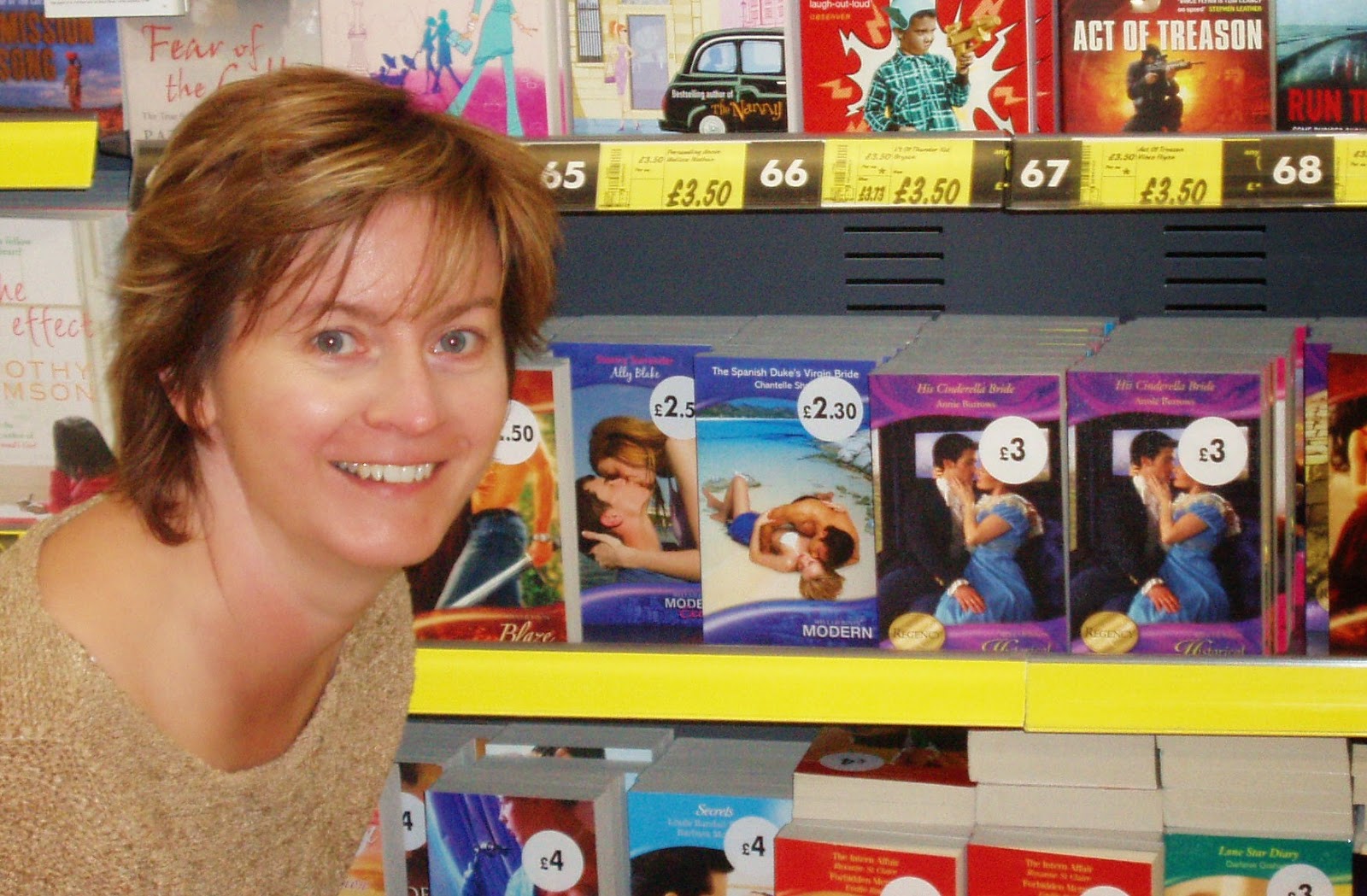 Well - going on the writing course did the trick (so my tutor said).  Mid way through my second term, Mills & Boon finally showed some interest in a manuscript they'd had so long I was sure they must have forgotten all about it.  Eventually it got accepted.
So I never needed to send anything to the New Writers Scheme after all.
But at least I had a plan B.
And if plan B had failed, you can be sure I'd have thought up a plan C, then a D, then...

(And yes, you may have spotted several other things in this article that begin with D - each of which a writer needs.  Which D do you find you need the most?)

Annie's latest book, Portrait of a Scandal, is available from Amazon UK
Posted by annie burrows at 15:42 No comments: