The Story Behind the Book: 'Why Do Fools Fall In Love' by Louise Marley

I was originally given two days to come up with the idea for Why Do Fools Fall in Love. My agent wanted to sell it as part of a two-book deal with Smoke Gets in Your Eyes. In the end, the deal with the proposed publisher fell through and I signed with someone else. But this is how I came up with the story.

I liked the idea of two attractive men, who were complete opposites in personality, competing for the same woman. But who was this woman?

I remembered that old movie, the Bodyguard, and briefly thought about having a female actress and a hunky male bodyguard. I dismissed that idea for being too obvious, but then had the idea to switch the sexes. What if I had a too-handsome-for-his-own-good actor being forced to put up with a minder, because wherever he goes he inadvertently gets into trouble? What if the female bodyguard was equally reluctant to take on the job, feeling she’s being forced to ‘babysit’ an actor who’s too stupid to duck when women throw themselves at him?

Researching the book was remarkably easy. At the time I was living in a tiny village just outside Bath (a magnet for any production company wanting to make a costume drama), and I spent a day watching the BBC film A Respectable Trade.

Although I came up with the synopsis over a couple of days, the book itself took a year to write and was eventually sold to Poolbeg Press. When the rights reverted back to me, I republished it as an ebook with Amazon KDP. It has now sold over 40,000 copies.

Not bad for a book thought up over a weekend!

Email ThisBlogThis!Share to TwitterShare to FacebookShare to Pinterest
Labels: Bath, chick lit, inspiration, Louise Marley, publishing, romantic comedy, The Story Behind the Book, Why Do Fools Fall in Love?, writing

You Know You're a Writer When ... by Louise Marley

People have this strange idea that writers are odd …


1. You can have a big fat book of poisons on your bookshelf and no one thinks anything of it


And it’s sat right between those books on weaponry and causes of death (mwah ha ha).


2. You talk to yourself in the supermarket


If you must act out your dialogue, can't it wait until you get home? Try carrying a notebook and pen to jot down ideas. You should have plenty of these because,


3. People are always giving you notebooks and pens for presents


Possibly because you write snatches of dialogue on anything that happens to be handy: magazines, kitchen roll, an old T-shirt (which unfortunately turned out to be not quite as ‘old’ as you’d thought). Which means,


4. No one dares to throw away any scrap of paper in case that illegible bit of scribble was the tricky part of your work in progress - and you have a complete meltdown

I’m only going to say this one more time - use the damn notebook.


5. You have an inordinate amount of photographs of hot men downloaded onto your computer


These are inspiration for possible heroes, obviously. Duh!


6. When watching a movie, you finish all the actors’ sentences for them and can guess who’s ‘dunnit’ before the opening credits finish


No one likes a smartass. However,


7. It’s amazing how many movies you can con your family and friends into seeing at the cinema in the name of ‘research’


8. You can spend all day on the Internet and that’s called ‘research’ too!


Although you may want to delete some of those Google searches.


9. Before your friends will part with any juicy gossip, you have to swear not to put it in your next book

That's an easy one. By the time you've changed all the names, locations and er, 'props', no one is going to recognise themselves anyway. Hopefully.

10. You set the dinner table for the wrong number of people


Because you were thinking about your imaginary family, not your real one. But hey, at least you remembered to cook dinner! You did remember to cook it, right?


11. You give one of your children the same name as your latest hero/heroine because you hadn’t got the name out of your system when you went into labour


But as your children think it’s far too cringe-worthy to read one of your books, that secret is probably safe.


12. You’ve perfected the art of being able to quote back the last thing anyone says to you, just in case they notice your eyes have glazed over - and realise you’re thinking about your latest plot


13. You also have procrastination down to an art form. Instead of working on your new book, you’re entertaining yourself by writing/reading stuff like this 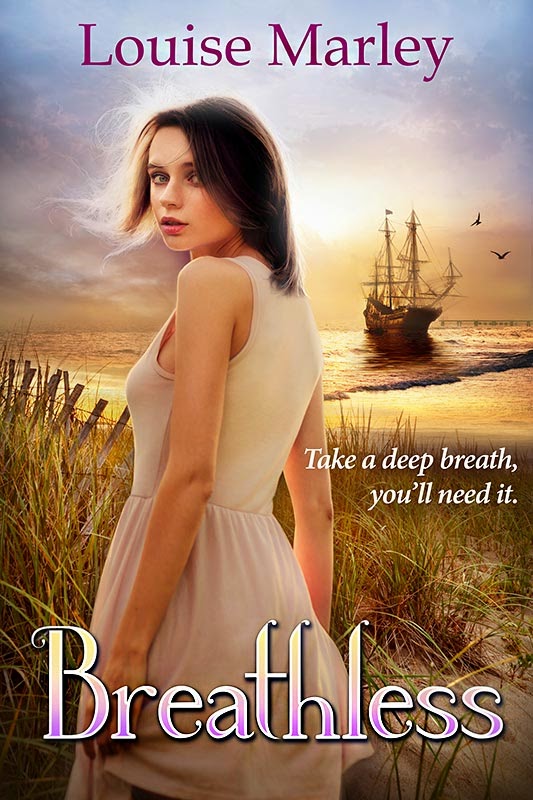 Meeting the Troops by Annie Burrows

As a writer of historical romance, Annie Burrows spends a lot of time doing research.  She tells us she needs to know as much about the period in which her characters lived, if she wants them to come alive on the page.  From now on, each month Annie will be telling us about some of this research...

Last month, my search for the perfect scone...oops, I mean inspiration for my books, took me to Ickworth in Suffolk.  I wasn't there to look round the house itself.  Instead I went straight round to the events field behind the rotunda where something extraordinary was happening. 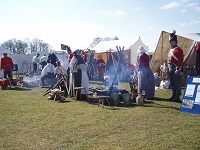 Several groups of historical re-enactors, who share a fascination with the same period I do - the Regency - were gathering to experience what it would have been like to be a soldier during the Napoleonic wars. 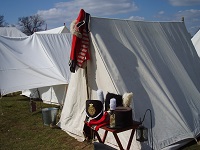 The first thing that struck me was just how much wood was being consumed.  Every other tent had its own camp fire, on which the camp followers prepareda variety of interesting-looking food.  Which we weren't allowed to eat due to modern health and safety regulations. 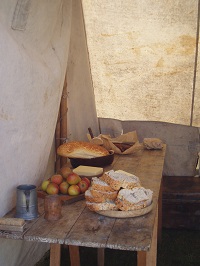 ( I was ok, though - there was a cafe up at the house which did serve tea and scones - and fabulous coffee and walnut cake - but I digress)
Though none of the soldiers would let us touch their guns, they were more than willing to explain, and demonstrate, how they loaded and fired their weapons. 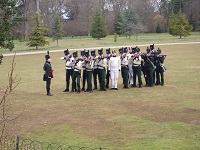 I met a naval lieutenant, who explained what he was doing so far from his ship (communications) 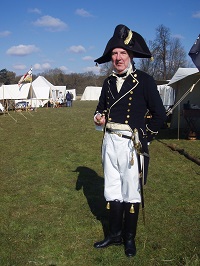 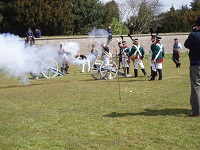 And watched a film crew trying to re-create a skirmish between French and British troops. 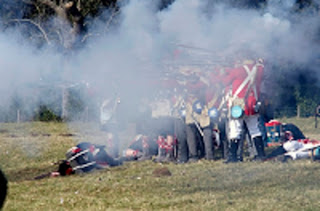 Now I have all the material I need to create half a dozen military heroes, and at least one Captain in His Majesty's Navy.
Posted by annie burrows at 11:37 No comments: