Life Below Stairs by Annie Burrows

One of the great things about being a writer of historical romance is that it gives me the perfect excuse to visit the many historical sites of England - under the guise of research... 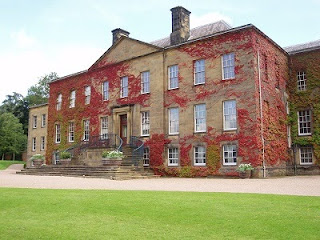 I can't remember now what excuse I gave for dragging my husband down to Erddig during last summer holidays - but as it is a National Trust property I could promise him there would be a tea room.  We put it to the test as soon as we arrived, because we set out so early neither the house nor grounds were open yet. Anyway, after fortifying ourselves with a pot of tea and a home-made scone, we had a wander round the outbuildings. 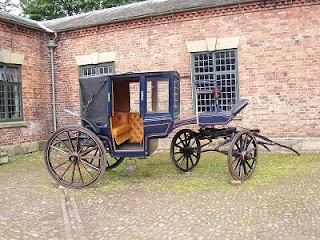 In the stable yard we came across this carriage -
There was nobody about to tell me I shouldn't, so I climbed in to see what it would have been like to be a grand lady, going fo a drive in one.

The seat was surprisingly comfortable, although it might have been a different sensation when the carriage was being bounced across the cobbles!  On certain days, you can take a carriage drive round parts of the estate, and really get a feel for the period.
Sadly there were no horses or grooms around while I was there, so I had to settle for using my imagination.
(Drive on James!)


I did take a peek into the tack room, just in case there was a groom lurking there... 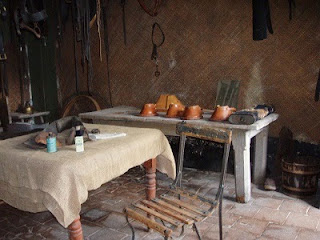 Those things on the table that look like pies, by the way, are actually leather covers for horses hooves.
By this time the grounds were open, so we went for a stroll.  They were absolutely beautiful, and I took so many pictures it is has been hard to decide which one to include.  In the end, I settled for the view of the back of the house across what is called the canal, but which is in fact a large, rectangular pond, full of the most amazingly friendly and curious fish.  They must be used to being fed, rather than angled for, I think. 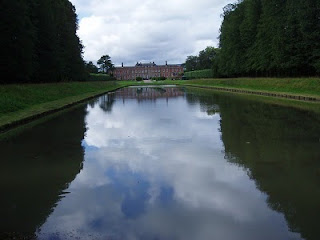 By this time I needed feeding myself, so went back to the tearoom for a spot of lunch (chunky, thick vegetable soup and freshly baked home-made bread).  And then we went on a tour of the house.  It doesn't usually open until 12.30, but if you are one of the first in the queue to get in the grounds, you can ask for a ticket for the guided tour which starts at 12 noon.  Because many of the rooms are quite small, they have to limit the number.  Though we missed the tour, we found the staff dotted about the place incredibly friendly and helpful, and if they didn't have the answer to anything we wanted to know, they had files full of information they could consult. 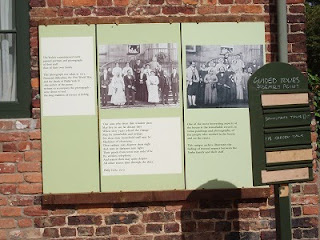 The unique feature of this house, though, is the interest the family who owned it took in their servants, and the way they immortalized them through both portraits and poems.  The first owner began the tradition, and his heirs kept up with the tradition, right up to Victorian times when photographs replaced the portraits.

One poem which struck me as amazing was written by Philip Yorke in 1912, and was almost prophetic.  It is shown on the right, but as the print is a bit too small to read, I've reproduced it here:

Our sons who from the window gaze,
May live to see far distant days,
When sixty years a-head the change
May be remarkable and strange,
For then their household staff may be
Machines of electricity,
Then radium may disperse their night
And turn its darkness into light:
Their goods from town may order'd be
By wireless telephony
And transit then may quite despise
All other routes than through the skies!

Uncanny!
Duly amazed, we returned to the tearoom for one last glass of orange squash and a slice of the most deliciously moist carrot cake I've ever had, before getting back on the road home.

(if you want to sample the carrot cake...er...find out more about life below stairs in Victorian England, click on Erddig )

The House that Inspired the Prince Regent by Annie Burrows

One of the great things about being a writer of historical romance is that it gives me the perfect excuse to visit the many historical sites of England - under the guise of research. 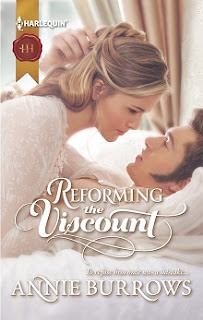 When I was in the planning stages of "Reforming the Viscount", (which is out this month - shameless plug!) I heard about a house that I thought would make the perfect backdrop for some of the later scenes in the book, and promising him There Would Be Scones, dragged my husband for a day out there.

The house I'd heard about, and which made me drag my husband out of his shed, was Sezincote, in Gloucestershire.  It was designed and renovated by a man who'd spent his working life in the East India Company Army - just like my heroine's first husband.  When he retired, this "nabob" wanted to include the beautiful features he'd seen in buildings in India in his English country house.  So he provided his architect with sketches he'd had drawn in India of domes and minarets, ornate fretworking and peacock tail arches for the windows. 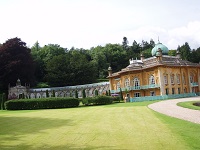 Many nineteenth century visitors found the results grotesque - but they talked about the place, because it was just so different.  And eventually news of this miniature Indian palace reached the ears of the Prince Regent. In 1807, during a visit to the nearby Marquess of Hertford, he became so intrigued by descriptions of the unique architecture, he drove himself over in his curricle to take a look.  He loved the house so much that he promptly informed his own architect, currently making "improvements" to his Marine Pavilion in Brighton, that he wanted to create a similar effect.  Only of course his domes were bigger, his minarets taller, and there were a lot more of both than the modest amount adorning the rooftops of Sezincote. 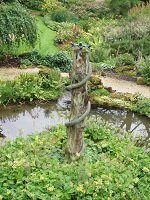 Fortunately my hubby, a keen photographer, was as fascinated by the house and grounds as both the Prince Regent and myself, and I had no trouble getting him to linger on site - him taking pictures of the amazing fountains and pools, and me mentally altering the layout of the shrubberies to fit with scenes I was already imagining taking place between the various pairs of lovers attending the country house party.  I discovered with great glee that many of the statues dotting the grounds were made of Coade stone - a substance which was much in use during the Regency era, until the recipe for making it was lost.  And that Suray, to whom the temple (pictured below) is dedicated, is prayed to in order to stimulate the intellect of the worshipper. 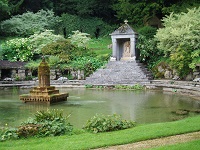 Later in the day, with my intellect duly stimulated, and my feet aching, I allowed hubby his promised scone, which was served to us, along with pots of tea, in the orangery which overlooks one of the lawns.

Visiting Suraya must have helped, because as I gazed out over the lawn, (and the back of hubby's head as he snapped yet more photos), I came up with the rules of a game which children who lived in such a house must surely have played....and also a way in which I could get it into a romance... 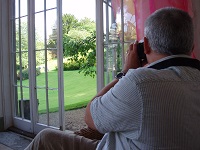 My Inspiration by June Francis

June Francis has written over 20 sagas set on Merseyside, as well as historical romances for Harlequin Mills & Boon. So after 30 years, and 34 novels, what inspires her to keep writing?

I’m over halfway through of what I hope is the final read through of my latest manuscript. I’d hoped to whizz through it, but the fact that I need to get rid of about five thousand words means that I have to do a line by line edit, so it’s taking me much longer than I reckoned on.
I should have learnt my lesson by now because this is my 34th novel and, after 30 years of being a writer, I should know better. I found myself asking what is it that still inspires me to keep on writing when it’s such hard work. I’m not saying that being a novelist doesn’t have its good points because they are manifold. Lunching with likeminded writer friends, getting away from the word processor to do research, or a talk with groups that actually are glad to listen to me speak about myself and the profession I love best.

There was a time when I believed all I had to do to have my story published was get it down on paper and send it off. A publisher would send me a contract and then lots of nice money. I was inspired by the thought of money and seeing my book on the shelves of W.H.Smith’s. But when that first manuscript came winging back I soon discovered my mistake in sending off a first draft.


Writing, I discovered, was an art which involved not only a lot of imagination and rethinking but also cutting and polishing. I was inspired by the thought of writing the most interesting, amusing, exciting, escapist and thought provoking book I could - which, if I was very, very lucky, would make it to the top of the best sellers’ list.


It’s never happened and at my ripe age I think it never will, but still I keep on writing for those readers who write to me and say how much they enjoy my books. Then there’s the New Zealander who wrote and said a certain book of mine had changed her life. How inspiring is that!

Memories Are Made of This
An enthralling historical saga set in 1950s' Liverpool.
(Sequel to It Had To Be You)

Liverpool, 1954. Young Jeanette Walker often wonders what became of her mother who disappeared without trace during a wartime bombing raid thirteen years before. Was she killed outright, or did she run off with another man, as tyrannical Great Aunt Ethel insists? Embarking on a dual mission to find out what really happened to her mother and to track down the handsome stranger who came to her rescue, Jean is little prepared for the hornets' nest of family secrets and lies that her investigations will stir up.