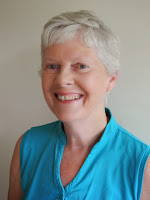 My first published story appeared in the Brownie magazine half a century ago, now my Pocket novel, Safe Harbour, is to be published by People's Friend.
During the past fifty years I’ve continued writing, while pursuing a career as a librarian and bringing up my children. I began writing stories for women’s magazines, then moved on to longer fiction.
I have twice been short-listed for the Harry Bowling Award, writing under the name Ruth France, and my story Harvest Home was included in the Hay short story competition’s anthology Loss and Deception.
I have completed three novels, as yet unpublished, though one was recommended for publication by the Romantic Novelists’ Association New Writers’ Scheme.
I have also grown the best tomatoes and vegetables in North Wales with compost made from shredded rejection letters.
Now my Pocket novel, Safe Harbour is to be published by People’s Friend. Did I already say that?