Trisha has been tagged by fellow writer Annie Burrows to participate in The Next Big Thing, where authors tell you all about their next book. So here she goes!


What is the title of your next book?


Good Husband Material. This is actually a fresh new edition of my very first romantic comedy, which has long been out of print. 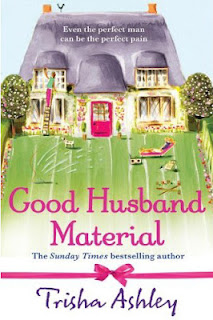 When will the book be published?


What genre does your book fall under?

What is the one-sentence synopsis of your book?


Her first love was all wrong, so why doesn’t marriage to Mr Right make her happy?

How long did it take you to write the first draft of your book?


The origins of this book go a long way back in time. When I first began writing adult novels, they were satirical ones and this started out as an exploration of the effect moving to the country could have on a marriage that had seemed pretty rock-solid beforehand. I wrote the first draft in two weeks and called it My Place in the Country. It went on to be shortlisted for the Constable trophy, then a prestigious prize for an unpublished novel, but didn’t find a publisher until my agent took me on and pointed out that I was writing romantic comedies without any romance in them.


Which actors would you choose to play your characters?


Well … I’ll have Johnny Depp for Fergal! But I need a tallish, sassy redhead for Tish and I can’t immediately think of one.


What other books would you compare this story to?


I wouldn’t, there wasn’t anything quite like it when it first came out. Now, I expect there are, but I will leave comparisons to others.


Generally, my recent novels have had more comparisons with Marcia Willett and Rosamund Pilcher than any other authors, but my favourite description is ‘Midsomer Murders meets League of Gentlemen!’ My first four novels, including Good Husband Material, still have a very satirical edge to them. I think I mellowed a bit after that. But my readers like a wide variety of other authors and I’m just happy to be one of them.


Who or what inspired you to write this book?


I was doing the Earth-mother, Good Life thing in the middle of a town when I wrote the first draft, growing herbs and fruit, baking my own wholemeal bread. I dreamed of living in the country and then started speculating about what effect such a move would have on a couple who seemed on the surface to be a perfect match, but underneath wanted very different things.


What else about the book might pique the reader’s interest?


The gorgeous Fergal? That the heroine doesn’t realise she has red hair? The fact that I immortalised my beloved parrot in it? I think what I like most about the heroine, Tish, is that she’s such a bundle of contradictions: for instance, she says she doesn’t want pets (too unhygienic, for a start) but when a dog and a parrot are foisted onto her, it is clear that despite what she says about them, she actually comes to adore them.


Trisha’s next new novel, Wish upon a Star, will be published in early November 2013 by Avon HarperCollins.
Posted by Louise Marley at 16:50 4 comments: