The Next Big Thing 3 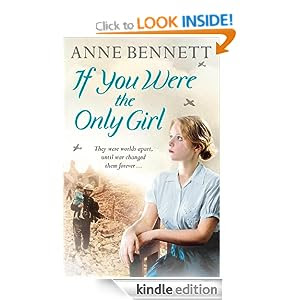 Hello, I'm Anne Bennett, and I was tagged by fellow Novelista Valerie-Anne Baglietto for the Next Big Thing where I tell you all about my latest release ...


IF YOU WERE THE ONLY GIRL

What is the title of your book?

My book is called “If You Were The Only Girl”. It was thought up by my editor and initially I didn’t like it at all, but the problem was I couldn’t find anything else. Off I went to the Novelistas’ meeting feeling sure my friends would feel the same way about the title as I did and probably could come up with something more suitable. However, they not only loved it, but also burst into spontaneous song, much to the amusement of the hotel staff. In fact my friends were so positive about the title, I began to see it in a new light and eventually came to love it myself, especially as I realized that the whole song is really the essence of the book.

Where did the idea come from for the book?
I don’t really know where the idea came from. It doesn’t need much to start me off anyway; an overheard comment, a snippet in the paper or some tale I am told. Other times ideas pop unbidden into my head and that was the case with this one, though I did use details given to me from my older cousin, Maura. She told me how bad things had been for her as a child growing in Donegal Ireland after her father became bedridden after an accident. Her mother cultivated the garden and used any surplus to trade for other things in the shop. But, there the similarity ended, and the rest is pure fiction.

What genre does your book fall under?

It’s difficult to know what genre my book falls under because they keep moving the goal posts. Once I wrote Sagas plain and simple and then I was told that books written about the past 50 years plus were called Historicals and in some bookshops they are grouped with Romance. So take your pick. I will just write the books as I always have done.

What else about your book might pique the reader's interest?
I don’t really know, but the popularity of Downton Abbey might help a little as people want to see the bottom-of-the-heap scullery maid make good. People in Britain generally cheer for the underdog.

I also have two short stories coming out. One for My Weekly on 26th January, called “We’ll Meet Again” and the other in People’s Friend Spring bumper issue called “Brown Eyed Beauty” available in February.


The next author I’ve tagged to tell you about her new book is ... Annie Burrows!

(This post was uploaded on to the blog on Anne's behalf.)
Posted by Valerie-Anne Baglietto at 15:08 No comments:

Email ThisBlogThis!Share to TwitterShare to FacebookShare to Pinterest
Labels: Anne Bennett, historical. saga, If You Were the Only Girl
Newer Posts Older Posts Home
Subscribe to: Posts (Atom)