Do you remember the cake from the Novelistas' Christmas party? Juliet Greenwood made it, using one of her mother's recipes. It was absolutely delicious! So, if you'd like to have a go at making it yourself, here is the recipe. 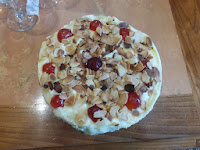 Method
Cream butter and sugar, add eggs gradually. Beat well. Add fruit and nuts and rind of orange and lemon. Fold in the flour and mixed spice.
Place in greased cake tin (7inches/18cm) and bake for 1 hour at 180 (160 for fan-assisted) or gas mark 4. Turn out onto a plate to cool. While still warm make holes in the cake with a knife and feed in a little of the orange and lemon juice, and either some of the pineapple juice or a tipple of your choice (brandy or sherry work nicely). When cool, ice with butter icing flavoured with a little lemon and decorate with cherries and toasted almonds.
Can be made the night before Christmas, and the fruit and nuts can be adjusted. Just put in what you like best! Simple and delicious – enjoy! 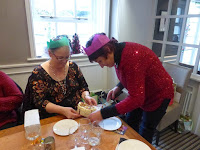 Posted by Louise Marley at 17:31 No comments:


Novelista Annie Burrows writes historical romance for Harlequin Mills & Boon.  This month, pretending it was research, she went on the hunt for Mr Darcy...

This year is the 200th anniversary of the publication of Jane Austen's "Pride and Prejudice".  As part of the celebrations, a huge statue of Colin Firth is on tour throughout the UK, at locations where various parts of the 1995 BBC series were filmed. 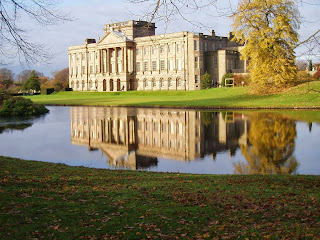 And yes, that is where he dived into the lake, got his shirt soaked, and won Lizzy Bennet's heart (according to the Andrew Davies adaptation!)  And it is at Lyme Park where the 12ft fibreglass statue will make its permanent home.

First off, my chauffeur and I went to the tea rooms.  The scones were enormous, fluffy on the inside, and crispy on the outside.  While the chauffeur was warming his hand on a mug of tea, I went off to try on some Regency gowns, which I'd noticed that visitors could try on.

I had great fun dressing up as a Regency lady, and imagining myself the owner of a stately home. 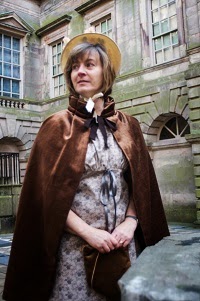 On the day I went to Pemberley (ok, Lyme Park, but I was starting to get into the spirit of things by the time I'd tried on the costume), visitors could also take a horse and carriage ride. 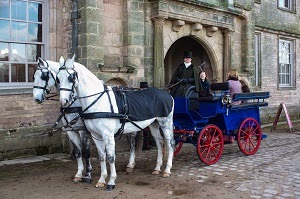 There was also a collection of the costumes worn during the filming of the BBC series.  Below are:
Lizzy and Mr Darcy's walking costumes 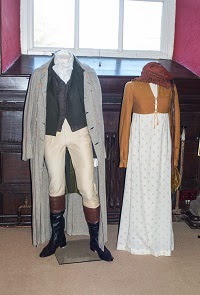 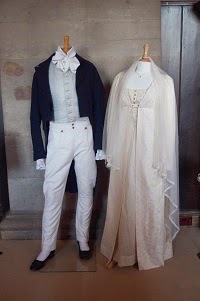 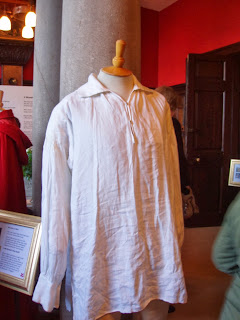 Finally, we wandered round the grounds until we came to the lake, into which Mr Darcy (or rather Colin Firth) dived to cool off on that memorable day when Lizzy Bennet came calling.  And there he was, dripping wet and twelve feet tall. 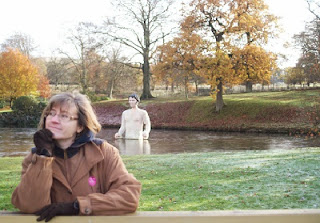 Annie's next book is out in January.  "Courtship in the Regency Ballroom" contains reprints of two of her early stories: "His Cinderella Bride", and "Devilish Lord, Mysterious Miss."