Book Launch for We That Are Left

Friday was the launch for Juliet Greenwood's new book, We That Are Left and the Novelistas gathered together to celebrate. 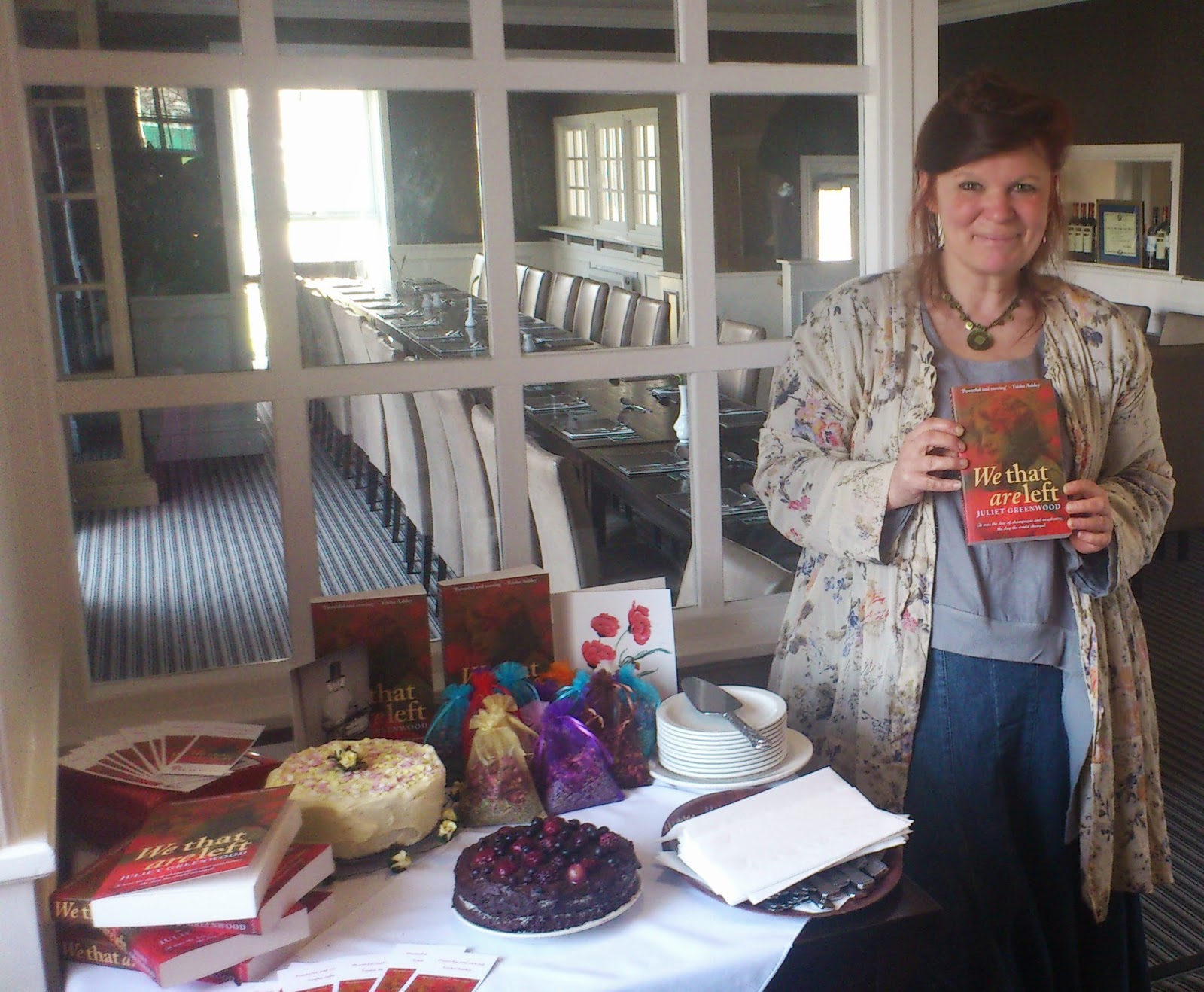 Juliet Greenwood with her brand new book, We That Are Left. 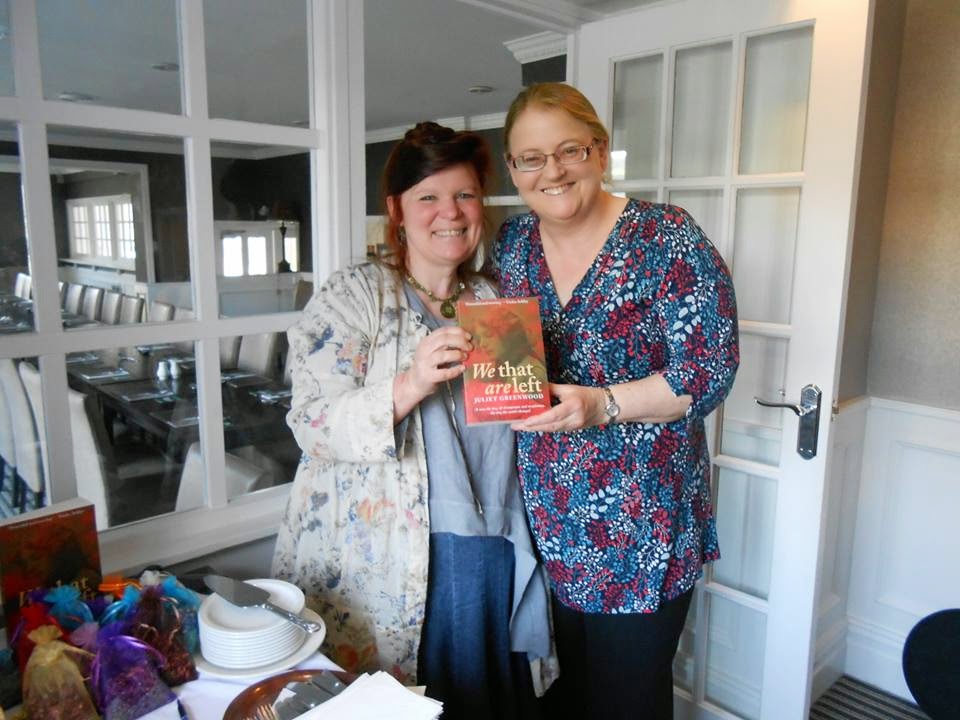 Chocolate cake! This cake is suitable for vegans and is gluten-free and sugar-free. Recipe courtesy of Plant Based Alchemy.

Juliet' s seed cake. You can find the recipe on her blog.

August 4th, 1914: ‘It was the day of champagne and raspberries, the day the world changed.’ Juliet Greenwood’s moving, thrilling novel honours the sacrifice of soldiers and civilians in World War I and captures how lives were changed afterwards, some destroyed, but some, with love and courage, rebuilt anew. Elin lives a luxurious but lonely life at Hiram Hall. Her husband Hugo loves her but he has never recovered from the Boer War. Now another war threatens to destroy everything she knows. With Hugo at the front, and her cousin Alice and friend Mouse working for the war effort, Elin has to learn to run the estate in Cornwall, growing much needed food, sharing her mother’s recipes and making new friends – and enemies. But when Mouse is in danger, Elin must face up to the horrors in France herself. And when the Great War is finally over, Elin’s battles prove to have only just begun.

Annie's A - Z of writing by Annie Burrows


Novelista Annie Burrows takes a highly idiosyncratic stroll through the A-Z of the writer's life.
Starting with A is for...

Well, Author, obviously!  Nothing beats the feeling of getting that call from a publisher, saying that they want your work.  (Or not much, anyway). 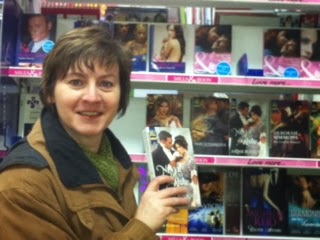 Only, the minute you become an Author, you have to start making a lot of decisions.  Like, for instance, should you take a pen name?
And if you do, how do you choose it?

I knew right from the start I didn't want to write under my own name.  I value my privacy, you see.  When I write that best seller, I don't want to be staked out by paparazzi who've discovered where I live...(delusions of grandeur?  Moi?)
And so I informed the lovely, intelligent woman who'd recognized the brilliance of my first book that yes, I did want to write under a pseudonym.
And how did I want to be known?
Christy Kendrick, I replied.  (Christy was my sister's pet name for me, and Kendrick my grandmother's maiden name, and I thought it had a kind of ring to it.  As though it should belong to a writer of historical romance.  I'd even opened a new email account for my fan mail as christyk...)
There was a brief silence on the other end of the phone.
Then, "Well, we already have a Kendrick writing for Mills & Boon, and we don't want readers to get confused.  But as soon as you've come up with something else, we will send out a contract."
Mild panic ensued.  If I didn't come up with a pen name they liked, would they change their minds about offering me a contract? 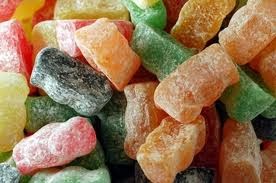 Hurriedly, I wrote a list of about half a dozen names I thought might work.  (Including Sue Kray, which is the Anglicized version of sucrée, or, "The sweet lady" which was what I was used to being called in my job as merchandiser for jelly babies)
It was the editorial team at Mills & Boon who selected the name of Annie Burrows out of the list I sent them.  Which I suggested because Anne is my middle name, and Burrows is my married name.
So writer me still feels like a part of "real life" me.

(Although when I went to my first conference as a published writer, and people asked me what my name was, I had to look at my name badge to check!) 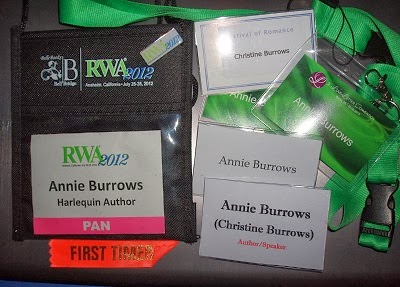 I'm more used to being Annie now.  Annie the Author.  It has a nice, alliterative ring.
Although later on, I discovered the way I should have picked my author name.  People who know what they are doing advise you to consider where you might get put on the shelves, when picking your author name, to maximise your earning potential.  Early in the alphabet is good, for readers who browse in alphabetical order.  Or late, for those who browse in reverse alphabetical order.  Or next to someone really famous in your field, so that people pick up your book while they're looking for someone else. Annie's latest book, Portrait of a Scandal is available now from Amazon UK
Posted by annie burrows at 14:07 2 comments:

These are old-fashioned cakes that I found in a 1914 cookbook. I thought I’d never tried them before, but after I’d made them and look a bite they were strangely familiar. I think my mum or my aunts must have made them when I was a child. They are delicious and easy to make – especially with frozen pastry to cheat! 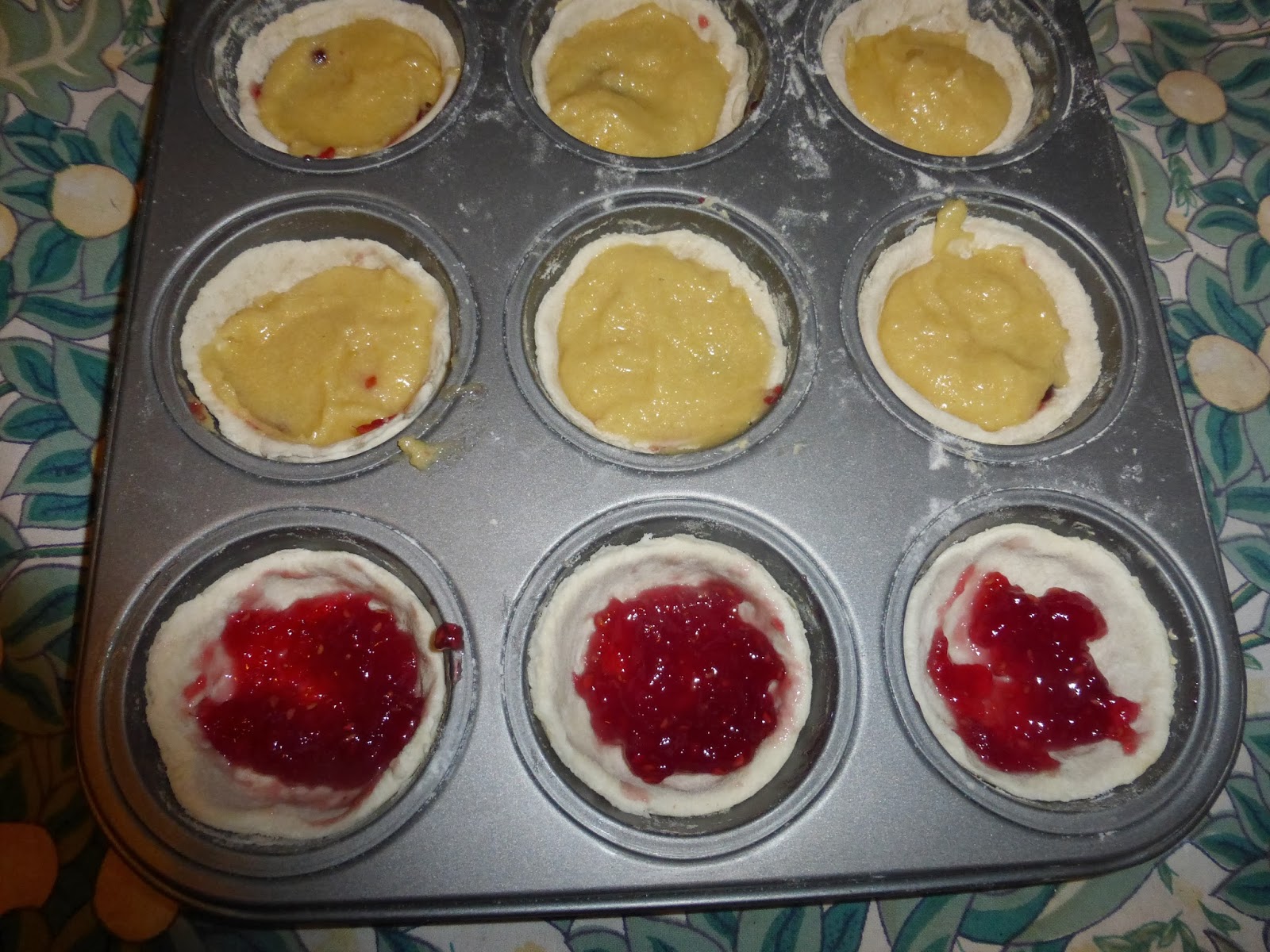 Just after I’d tried mine, I stumbled across Jamie Oliver attempting to revive them on ‘Jamie and Jimmy’s Friday Night Feast’. They had far more variety and tried more modern versions – ones I definitely want to have an attempt! I like the sound of chocolate, apricot, strawberry and brandy & vanilla. Yum! 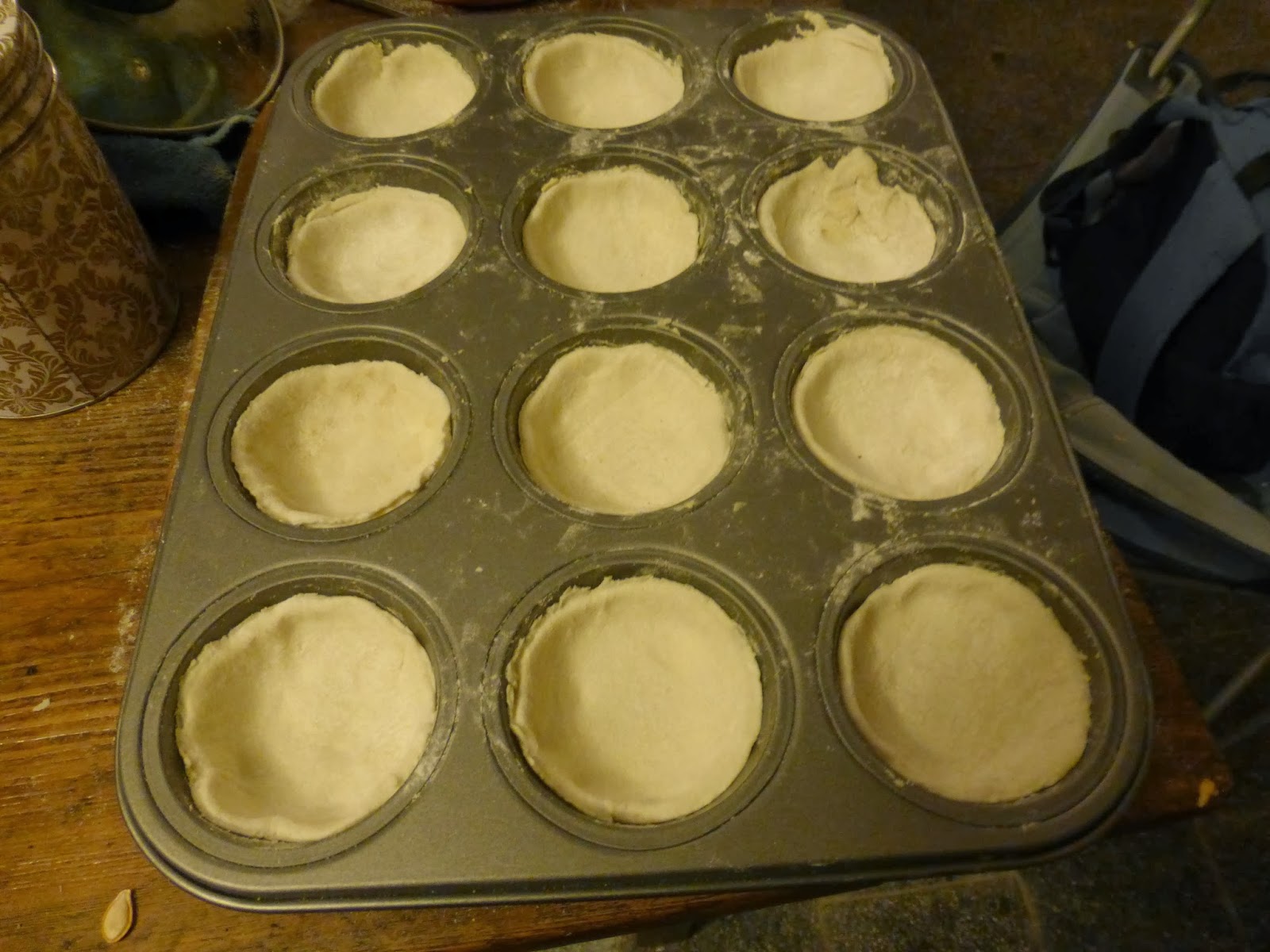 I used to live near Richmond, but sadly I don’t think I ever discovered this wonderful bakery, ‘The Original Maids of Honour’ , where you can find out more about the history. (Henry VIII is supposed to have named them ‘Maids of Honour’ – they are THAT traditional) and even sample some of Jamie Oliver’s creations. I fancy Apricot myself … 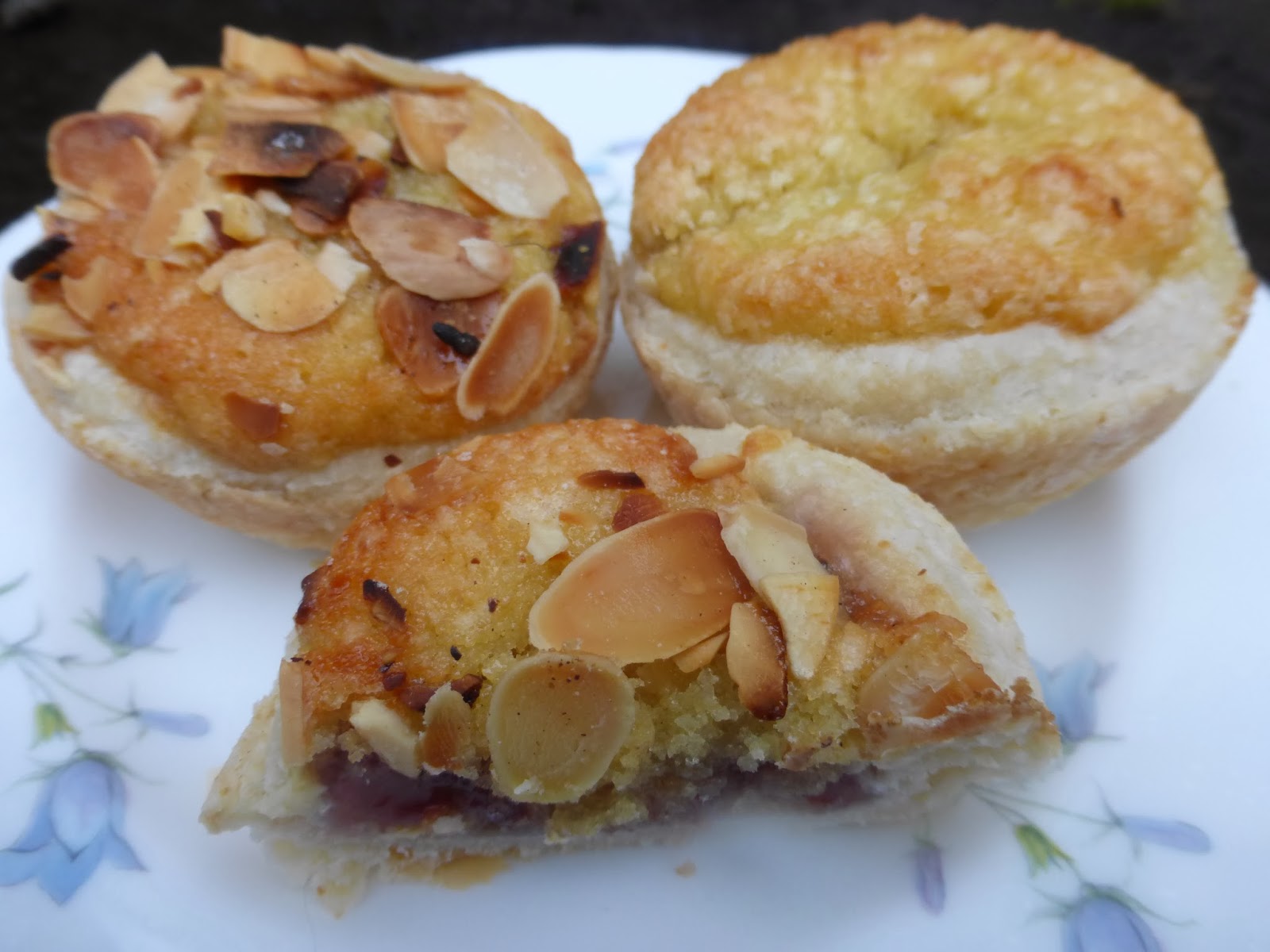 Elin’s Maids of Honour from ‘We That are Left’

Beat the sugar and the egg together, then stir in the almonds. Put the baking powder last. Have some patty-pans/muffin tins lined with puff-paste (frozen is fine), lay a teaspoon of raspberry jam at the bottom of each, and cover with a teaspoon of the mixture. (I decorated them with toasted almond flakes, which worked well.)

Email ThisBlogThis!Share to TwitterShare to FacebookShare to Pinterest
Labels: Juliet Greenwood, Maids of Honour, Recipe, We That Are Left, WWI

Post-its and Publication by Johanna Grassick

I attend writing courses for two reasons: because they’re an opportunity to get feedback on my work, and because they always give my writing a boost, generating ideas and inspiration. In those respects, this year’s Advanced Romance Writing course with Kate Walker was no exception, but what was different this time was that almost all the group had attended last year. This meant we knew each other (always good in the bar!) and Kate knew us, so she was able to tailor the course specifically to our needs.


﻿﻿﻿﻿﻿﻿﻿﻿﻿﻿﻿﻿﻿﻿﻿﻿﻿﻿﻿﻿﻿﻿﻿﻿﻿﻿﻿﻿﻿﻿﻿﻿﻿﻿This year in Fishguard we did a lot of work on character and how these can really drive the story. We examined the core emotions in our stories and used coloured post-its to make it visual (there was much excitement over the post-its, which Kate generously provided!)

We also discussed our opening chapters, both in one-to-one sessions with Kate and in a group discussion (fuelled by wine – well it was Saturday night!). I found this feedback invaluable, especially as the chapter I brought is a new genre for me: I’ve moved from writing category romance to a relationship novel, and with new territory comes uncertainty.

And there were special celebrations this year because one of the group, Rachael Thomas, has sold her first book to Harlequin Mills & Boon. Kate Walker has seen many of her pupils ‘graduate’ to be published authors, so she knows what she’s talking about when she advises to; “Write the story you really want to tell. Don’t imitate, don’t be afraid – write from the heart.”

So that’s what I’ll be doing – perhaps with the aid of a post-it or two!


Kate is running several more courses this year. Details are on her website:
http://www.kate-walker.com/index.html
Writers Holidays run the weekend in Fishguard as well as other courses: http://writersholiday.net/