Novelista Annie Burrows writes historical romance for Harlequin Mills & Boon.  This month she shares how a bout of research has been triggered by  Strictly Come Dancing!

I absolutely love the celebrity challenge show, Strictly Come Dancing, particularly because I'm a keen amateur ballroom dancer myself.  As this season's opening show ended with a beautiful, glamorous waltz, it set me wondering...just why was this dance considered so outrageous in Regency times?

Today, we think of the waltz as rather romantic, but a bit staid.  But when it first came to England, it even shocked the notorious Lord Byron.

So, I got searching...
During the Regency era, most of the dances were rather like our country dances.  If you've ever been to a barn dance, you would have been at home in a Regency ballroom.  People lined up to dance in sets of four or eight, and the figures performed would be shouted out by a caller.  Even though you would have a partner, you wouldn't be in any sort of hold with him, except for short bursts.
But the waltz was very, very different. 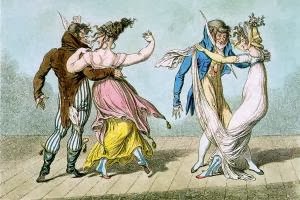 It began with the "March" which was a very brief side by side promenade.  This turned quickly into the "Pirouette."  The partners would take each other in one of several holds, one of the more popular of which had the partners facing in opposite directions, hip to hip, with one arm across the front of the partner's body and the other hands holding in an arch above the head.  In this hold, they would rotate very slowly, with their gaze fixed on one another. 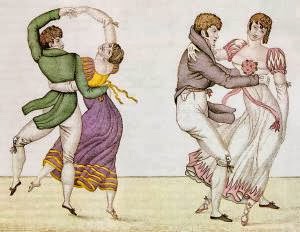 The next was the "Sauteuse."  At this point, the dance got a bit more energetic, with dancers working a little hop into the step.  The hold would also change - one possible option would be the man holding both the lady's hands behind her back.

The routine would finish with the "Jetté", which was even more energetic.  But even so, the partners would be in bodily contact with each other the entire time.  And because the only floorcraft required was keeping one's place in a circle of others, all moving in slow progression round the room, there was no need for the man to take his eyes off his partner to watch where he was going.

And Lord Byron's objection?  The hands could rest on any number of body areas, and linger...

Let's face it, the Regency waltz was the equivalent of the slow smooch at the end of the disco...

Annie's latest story, in an anthology called "A Scandalous Regency Christmas" will be available from 8th October from Amazon UK
Posted by annie burrows at 14:20 4 comments: