Let There Be Cake by Trisha Ashley

My latest book, A Christmas Cracker, is set in a small hamlet near Little Mumming. This was the scene of Twelve Days of Christmas, so you will be able to see what some of those characters are doing now – and one in particular plays quite a central role in the new book. But I’m not going to say any more than that – you will have to wait and read it to find out who it is! 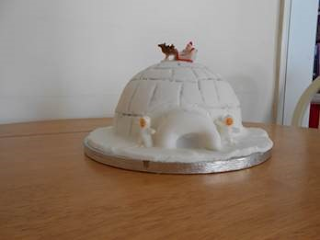 As usual, there are some recipes at the back including one for my Igloo Cake – and here’s one I prepared earlier! A miniscule Father Christmas is landing on the roof, which takes some doing when your sleigh is drawn by a team of frisky reindeer, but the two Eskimos look quite happy about it. I used a fruit cake recipe, but sponge or a traditional Christmas cake one would work just as well. 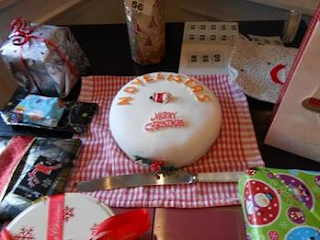 My Christmas cake recipe is the same as the wedding cake one in the back of Wedding Tiers, only instead of soaking the fruit in dry sherry for three days, I use dark rum, like in this one I made for the Novelistas Christmas party last year. (As well as talking about writing, we engage in a lot of cake-related activities!) 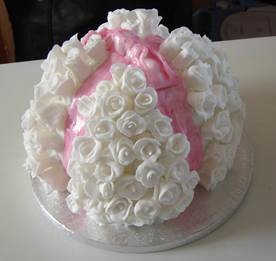 The cake I made for the Wedding Tiers book launch was shaped like an Elizabethan pomander, my most complicated cake yet. I baked a round cake in a huge Christmas pudding tin, and then covered it in marzipan, followed by fondant icing. Then I put an icing ribbon round it to divide it into four with a bow at the top and studded it all over with rosebuds. For a couple of weeks beforehand, whenever I had a few minutes to spare, I’d make a few icing roses. By the time it was covered, I could make them in my sleep.

It was just as well I’d taken some pictures, because the Novelistas demolished it in minutes, and all that was left was a scattering of white rosebuds and a few crumbs!

I could write an autobiography of my life punctuated cakes: Diary of a Fruitcake, anyone?

This post originally appeared in the October issue of Trisha Ashley's newsletter, which you can subscribe to here.

**THE COMPETITION IS NOW CLOSED**

You can win a signed copy of A Christmas Cracker, as well as a set of cat-shaped cookie cutters. The competition is open to all, just leave a comment below - it's that simple! (Closes midnight on Friday 30th October). 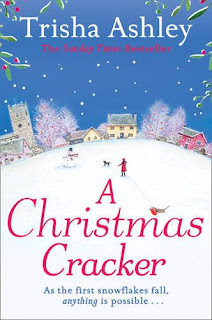 Things can’t possibly get worse for Tabitha. Framed for her boss’s dodgy dealings – passing sparkling wine off for vintage fizz – she’s got an eight month prison sentence! Her boyfriend's dumped her and given her cat away to a shelter.

But rescue comes when a kindly prison visitor puts her in touch with Mercy. A master of saving waifs and strays and impressed with Tabby’s creativity – paper-crafting is more Tabby’s thing than swindling! – Mercy wants her to breathe new flair into her ailing cracker business. Together with a staff of quirky ex-cons they’ll save Marwood’s Magical Christmas Crackers!

But someone’s not happy. Mercy’s nephew Randall wants to turn the mill into a shopping centre and he thinks Tabby’s a fraudster. So suddenly her future happiness depends upon winning the brooding nephew round. Tabby’s been through so much already, she’s not going without a bang!