Manchester Literature Festival drew to a close last weekend, and I have to say this was the most exciting Manchester LitFest programme I can remember (and I’ve been going since the festival first started ten years ago), packed full of big literary names. Obviously I couldn't go to all the events but I did make it to Margaret Atwood, Deborah Moggach, Joanne Harris and Louise Doughty, and below are tweets and snippets from those events:

At The Midland Hotel, Deborah entertained us by answering questions and recounting anecdotes in her very upbeat style, before we all enjoyed afternoon tea. I tweeted snippets of what she said:

"I wrote Tulip Fever in a rush of love for Dutch paintings of the Vermeer period." "I bought a painting and it spoke to me."

"Spielberg rang wanting to make a film of Tulip Fever - we all thought it was a prank!"

"I'm always an extra in my films."

"I get 2 or 3 emails a week, mainly re: Best Exotic Marigold Hotel. It's had a transformative effect on many people." 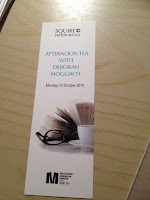 "Loneliness, isolation is a huge problem"

"I love good plots. I think they're a work of art."

I can't wait to read Moggach's new book Something To Hide. It sounds exciting with some really meaty themes.

Margaret Atwood was interviewed by the broadcaster and critic, Erica Wagner, and she spoke engagingly about her new novel, The Heart Goes Last, ‘an immensely funny and disturbing satire set in a near future where the lawful are locked up and the lawless roam free. Young, poverty-stricken lovers Charmaine and Stan sign up for a social experiment but the promise of a suburban paradise soon turns into a nightmare of conformity, mistrust, guilt and sexual desire.’
Margaret’s dry wit was hugely entertaining, and I came away eager to read this novel, having previously enjoyed The Handmaid’s Tale.


This event began with Joanne reading her Writer's Manifesto which explored how the writing world has changed in modern times, and how Joanne perceives the relationship between herself and her readers. I tweeted:

Snippets from last night: "The truth is, not everyone can - or should - be a writer..."

Fiction should present a challenge. Fiction is often uncomfortable. It is not democratic.

I love my readers...their diversity, & the fact that they all see different things in my books, according to what’s important to them.

Authors & illustrators need to pay their bills like everyone else.

Stories are never just entertainment. They help us understand who we are. They teach empathy. Stories bring us together.


The discussion which followed was equally fascinating. Questions were put to the panel, but I've kept to Joanne's answers for the sake of brevity:

Q: How much do you think about the reader while writing?

JH: I don’t. There are too many readers and they’re all too different. When reading, people see what they want to see [...] I write for myself.

Q: Have you ever had struggles with your publisher?

JH: Yes over small things. Publishers worry a lot about readers, and about moral ambivalence (eg bad characters getting away with bad things, or bad things happening to good people).

Joanne also recounted how she wanted to call her novel Peaches for Ramadan (its title is Peaches for Monsieur Le Curé) but her publishers were worried this sounded too political or that Muslim readers might react against it. In fact, Joanne reported, she's had very positive feedback from readers.


Louise Doughty was the Keynotes speaker at the Northern Lights Writers Conference (a day of panel discussions and workshops) and she was also interviewed about her work, particularly the bestselling novel Apple Tree Yard. Here are some of the highlights:

Louise was first published 20 years ago, at a time when writers such as Ian McEwan and Julian Barnes were very popular. However, Louise felt that their novels focused on the middle class and she set out to write something different. She is especially proud of a review describing her as an author who 'writes about the people who don’t normally get written about'.

It took roughly 7 years for Louise to get published and she likens this period to the time it takes to train for any profession; for example, a doctor or a lawyer. Writing takes time to develop sufficiently.

She advised: “Enjoy those early years because you can focus on the writing itself.” Whereas later you become an administrator of your career.

Most writers, she said, have to supplement their income by teaching or mentoring. Having another job can be a positive thing because it can feed your creativity. And having lots of time to write full-time can be as difficult as having very little.

Apple Tree Yard is currently at the casting stage for a BBC four-part drama. The genesis for the story came to Louise unexpectedly one evening: she visualised a woman in court, on the witness stand on trial for a serious charge. Louise wrote the first scene immediately, and this later became the novel's prologue. For the book’s launch, the publisher printed leaflets of the prologue which were distributed on the London Underground.

Asked about the television adaptation and the screenplay which has been written by Amanda Coe, Louise said “You develop a philosophical approach to your work being changed.”

Having read Apple Tree Yard myself, it was interesting to hear Louise talk about its structure which is complex because the story is told in the first person and with hindsight. “I wouldn’t have had the technical skill to write ATY as my first novel,” Louise admitted. “It has a certain readability and narrative arc that my previous novels don’t”.

All four events were equally fascinating and inspiring. I always find it reassuring to hear writers talk about the difficulties they've faced in getting published or with the creative process, because they're often problems we've all experienced. It's also interesting to hear what sparked a story, what the writer hoped to communicate, and how others have interpreted it.

You can read more about Manchester Literature Festival here and it's worth keeping an eye on organisations such as these throughout the year because they sometimes hold stand-alone events.

Can you recommend any good literature festivals?

Sophie Claire's novel, Her Forget-Me-Not Ex, is available from Amazon