The Next Big Thing - Never Trust a Rake by Annie Burrows

I've been tagged by fellow writer Anne Bennett to participate in The Next Big Thing, where authors tell you all about their latest book. So here goes! 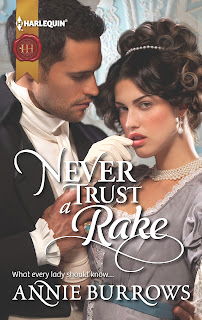 What is the working title of your new book?


Where did the idea come from for the book?


I have no idea - I was probably doing something incredibly boring and drifted off into a daydream. Why my daydreams so often feature Regency Rakes pursuing innocent young misses is a question probably best answered by a psychiatrist.


What genre does your book fall under?


Which actors would you choose to play your characters in a movie rendition?


There are no actors sufficiently rakish to portray any of the heroes I dream up. That is why I have to dream them up for myself, rather than becoming a fan of someone real (and therefore flawed).


What is the one-sentence synopsis of your book?


Rake meets his match in an innocent country miss.


Will your book be self-published or represented by an agency?


An agency? Do you mean, do I have an agent? No, I don't. But the books I write are published by Harlequin in the US, and Mills & Boon in the UK and Australia.


How long did it take you to write the first draft of your manuscript?


It usually takes me about 6 - 7 weeks to do a first draft of a book, during which I just fling everything I can think of at the page. Then I print it out to see what I've got, groan in despair, and start frantically revising. This part often makes me feel as though I'm shut in a dungeon trying to spin gold out of straw. When I've gone through the entire story to my satisfaction, I print it out again, and usually by this stage it only needs a few more tweaks before I feel it is in good enough shape to send to my editor.


What other books would you compare this story to within your genre?


I can't compare my work to anyone else! I do the best I can, with ideas I think I've come up with all by myself - but who was it said that a writer's mind is a bit like a compost heap? I write the kind of story I enjoy reading, so I'm sure I've been greatly influenced by Jane Austen, Georgette Heyer, and everyone else who's ever written a regency romance since I've been old enough to read them. But I wouldn't dare say my work is like anyone else's - it would either make me sound as though I was boasting I was as good as them, or as though I was writing pathetically slavish parodies.


What else about your book might pique the reader's interest?


Well, if you enjoy light-hearted regency romance, then you might enjoy reading about a man who doesn't trust women, but needs to marry to produce an heir, go about the business of finding a wife he can trust - and getting completely bowled over by the unsuspecting girl he targets.


The next author I’ve tagged to tell you about her new book is my fellow Novelista Trisha Ashley.
Posted by Louise Marley at 16:35

Email ThisBlogThis!Share to TwitterShare to FacebookShare to Pinterest
Labels: Harlequin, Mills and Boon, Never Trust a Rake, Regency romance, The Story Behind the Book