I don’t always make a traditional Christmas cake – or I do, but it’s a new kind of traditional cake, inspired by a trip to the Caribbean, because one year I flew out to spend Christmas on Grand Cayman, with my luggage full of packet bread sauce, stock cubes, cornflour and instant stuffing (and an inflatable Christmas tree).


In the local supermarket a helpful assistant managed to find me a solitary, forlorn, ready-stuffed turkey left over from Thanksgiving at the bottom of a freezer, but Brussels sprouts appeared to be a delicacy too far.

The turkey had been compressed into a strangely heavy, smooth, long shape like a giant lead bullet and it was just as well I checked the instructions on the wrapper when I got it back to the apartment, since to my astonishment they said it must be cooked from frozen. Well, this went against everything I’d ever been taught about cooking poultry, especially since the stuffing was in the cavity of the bird and not under the loose skin of the breast, making it more difficult to ensure the turkey was cooked right through.

Still, I was too unnerved by this strange object to do anything else but follow the directions to the letter, though I decided to give it extra roasting time, just to make sure it didn’t become Salmonella Central and poison the whole family.

You can imagine what it was like cooking Christmas dinner in an unfamiliar kitchen in Caribbean temperatures. By the time I actually got it onto the table, all I really wanted to do was climb into the giant American fridge and close the door.

The turkey looked just as it had done when it went into the oven, except that the skin had browned and it was, so far as I could tell, cooked right through to the solid, strangely greyish mass of stuffing inside. The meat was rubbery and tasted of nothing in particular, but no-one wanted to be the first to try the stuffing, which looked like something you might find in cavity wall insulation.

In fact, after all my hellishly hot endeavours, no one ate much of the turkey at all, but instead filled up with roast potatoes and the packet bread sauce I’d taken out with me, covered with thick Lancashire-style gravy. We washed it down with a refreshing local soft drink called Ting and I followed that with a couple of glasses of an even more refreshing local liqueur called Mudslide: I felt I deserved it.

Instead of a Christmas cake I’d bought a large and delicious chocolate rum cake, another local delicacy, and after a large slice of that I went for a swim to cool down. Considering I’d doggedly choked down a couple of slices of that turkey, it’s a wonder the weight didn’t pull me under.

While I was floating in the pool like a large, limp starfish, I wondered what on earth I’d do with the substantial remains of the despised turkey and remembered a previous Christmas dinner with friends at their waterside home on Antigua, where after the meal they’d casually tossed the turkey carcase to the barracuda who lived under the deck.

But on Grand Cayman we were by the beach, so that wasn’t an option: there’s just never a barracuda to hand when you really want one, is there?

You can get rum cake in different flavours all over the Caribbean, but it’s taken me a few attempts to recreate anything like it at home. Here’s my recipe for chocolate rum cake, which is as close as I can get to the original and makes a perfect alternative to the traditional fruit cake. 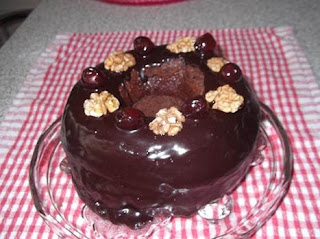 Heat the oven to 325 F/166C/gas mark 3 then grease and line with baking paper an eight inch cake tin. You can use a small bunt tin instead, if you have one, which makes it look more authentic.

In a measuring jug put four tablespoons of dark rum and then make it up to a quarter of a pint with milk.

Sift the flour, sugar and cocoa into a large mixing bowl and make a well in the middle. Into this, pour the rum/milk mixture, the beaten eggs, the oil and the golden syrup.
Mix this very well, and then pour into the cake tin.

Put into the oven and bake it for about half an hour, until the cake springs back when lightly pressed. Then turn it out onto a wire rack, remove the paper, and leave to cool.

In the Caribbean, these cakes are served plain, but for Christmas you could cover it in melted chocolate and decorate with a circle of halved walnuts or pecans and glacé cherries, if liked.

To do this, melt a large bar of good quality dark or milk chocolate, as you prefer, in a Bain Marie or a basin over simmering water: just be careful not to get any water into the chocolate. You can also melt the chocolate in the microwave, but don’t overheat it.

Spread the chocolate over the top of the cake with a spatula or butter knife and then press on the nuts and cherries, if using, before it sets hard.

And a rum cake is not just for Christmas – you can eat it any time!

This post originally appeared in the December issue of Trisha Ashley's newsletter, which you can subscribe to here.
Posted by Louise Marley at 08:41