It's always difficult to report back on a conference because there's so much valuable information and advice to be gleaned from the speakers, and #NLWC2017 was no exception. The day's agenda was packed full with guest workshops and panel discussions with writers, agents and editors, as well as a keynote speech given by historical writer, Sarah Dunant.

Kicking off the day was a panel discussion on Genre Writing with Julie Crisp (agent & editor), John Jarrold (agent) and Cath Staincliffe (crime writer & scriptwriter). The discussion centred mostly around science ficiton, fantasy and crime (sadly, no romance/women's fiction), and I've listed below some of the nuggets of advice which came out of the discussion: 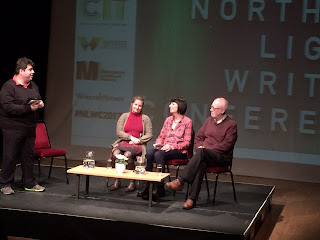 
Be aware of the market but write what gets you in the gut.

Cath Staincliffe researched the crime genre after being told by an editor that the issues and themes in her sci-fi novel would lend themselves to crime. She read everything in the library’s crime section then put her own bent on the genre by setting her novels in her home town of Manchester, and featuring a single parent protagonist working as a private investigator (rather than the more commonly used detective or police professional).

“If it’s a good book it doesn’t matter what (genre) label is attached to it.” (Julie Crisp)

Readers are drawn to a writer’s voice.

What is the next big thing (in terms of genre)? – Nobody knows. Everyone’s hoping the Psychological Thriller will soon have run its course, but it still featured prominently at London Book Fair last week.

Sarah considered the differences between literary fiction and all the other genres. Literary fiction’s first love is language. For Sarah, however, narrative drive is paramount.
But this doesn’t mean she doesn’t love language too, and in her own work she uses the engine of the story to convey this as well as philosophical and political themes.

“Story is incredibly important.” It’s inbuilt in humans to tell stories. They help us make sense of life and our fears about the future.

Writing is hard, no matter how experienced or successful you are, and as a writer you need to constantly challenge yourself.
Sarah recounted how she had to pause from writing one book (60,000 words into it) and take a 5 month break because she felt it wasn’t working. However, the break gave her perspective and room to relax, and she was able to complete it later.

Sarah sometimes shows her critical voice out of the room (literally – she gets up, opens the door, ushers it out, then closes the door!) if she feels it’s not helping the writing process. Later, she allows it to re-enter, usually when she needs to analyse the shape or structure of the book.


Asked about plotting, she said; “If you plot too tightly there’s no room for the unexpected.”
Characters sometimes take over, but they can also lead you into dead ends. As a writer, you must strike a balance between the technical and imaginative, and know when to use which.

The Northern Lights Writers' Conference is held annually at the Waterside Arts Centre in Sale, Manchester and you can find more information here.