I recently had the privilege of being on the panel of writers speaking at the Exeter Story Prize and Trisha Ashley Award.

Since I live in North Wales, this first meant getting down to Exeter, nearly 300 miles, and the longest I’d ever driven in one day. And since Trisha lives just along the coast from me, it also meant being responsible for ensuring Trisha Ashley actually got there to deliver the Trisha Ashley Award (no pressure then)!

We set off at 7am, when the roads were quiet. This meant we reached Gloucester Service Station (eco and not at all like a service station) for an early lunch in a painless manner, with just the last bit of motorway to Exeter to go. This was when the Satnav decided we urgently needed to return to Kidderminster, and when gently corrected went into a sulk and abandoned us to our fate among the scary motorway lanes around Bristol. However, between us we managed to get past and arrive safely for a warm welcome at Margaret James’ lovely home in Exmouth.

The next morning we travelled into Exeter by taxi (hurrah!) for lunch, before heading off to the awards. I hadn’t been to Exeter before, but I shall be definitely going back. I loved it, with its mixture of very old and new, and the church where the awards were taking place was a hidden gem. It was great to see so many people there. It was also a chance to meet up with old friends and new, and friends I’d known via Facebook and Twitter for years, but had never met in person, which is always a buzz. The panel seemed to go well - I certainly enjoyed it! It’s always stimulating to hear other writers’ experiences and opinions, and to be made to think about your own writing process to answer the questions.

The awards were then presented with aplomb, with some very excited winners. I’d almost forgotten that being shortlisted for short story awards was the way I began my writing career, so it was great seeing it from the other side. Then in the evening, we celebrated by going out for a delicious meal in Exeter, a chance to unwind and catch up with fellow authors. 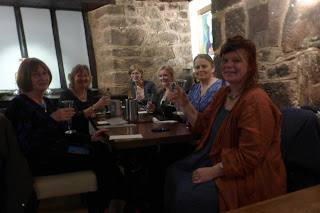 The only real drama came the next morning, when the taxi taking Trisha to the station to catch the train home didn’t arrive. Fortunately I’d waited to leave at the same time before setting off on a research trip round Cornwall, so I was able to take Trisha and Margaret into Exeter, braving the chaos of roads being blocked off for the Great West Run taking place that day. We went quite a few times round a very large and scary roundabout – but girl-power prevailed, and we finally found a way out and to the station.

The rest of my trip round Devon and Cornwall was easy–peasy after that – and the unplanned detour meant that the Satnav took me right past the door of Lanhydrock, which I’d decided I didn’t have time to visit, but when you arrive at a beautiful house and gardens just as the sun comes out – well, what can you do?

I loved my trip down to Exeter. Trisha and I had fun going down (despite the rebellious Satnav), and everyone was wonderfully welcoming. Much as I love the peace and quiet up here, it can sometimes feel far away (despite London being less than four hours away by train). Suddenly Exeter, and all the friends, old and new, don’t seem quite so far away.

So congratulations to the winners and all those short-listed for the Exeter Story Prize and the Trisha Ashley Award – and see you next year!

You can find out more about the Exeter Story Prize at Creative Writing Matters.