A Little Learning by Anne Bennett

I can't remember a time when I didn't write. I was a voracious reader and they seemed to go together. However, I never expected to earn my living by writing books!  That sort of thing didn't happen to working class kids in the 1960s when I was growing up.  I also wanted to teach, though I achieved this by  a roundabout route, entering Teachers' Training College as a mature student after I had got married and had two children of my own.  By 1976 I had my teaching certificate and was doing a job I loved.  Alas, in the spring of 1990 a spinal injury caused lack of feeling and movement down my legs. I had to use a wheelchair and I was invalided out of teaching.

We moved from the West Midlands to a beautiful town in North Wales, but my life stretched out like a void and so to fill the days ahead I began to write. I began to research the origin and meaning of nursery rhymes, a topic that had always fascinated me. I then went on to write for children, interspersing this with writing short stories for the writing magazine I took every month.

I only ever submitted one of the stories.  It was for a competition for Valentine's Day and my story came second. The prize was a year's subscription to the Romantic Novelists' Association  (RNA). This organisation run a critique service, the New Writer's Scheme, where unpublished writers submit manuscripts to be read and critiqued by established authors. 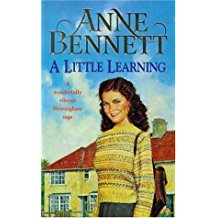 My first submission  the reader said was good but not good enough to be published but, more importantly, it explained why it wasn't. So I made sure I didn't make the same mistakes with the second submission! That was called A Little Learning and it was accepted by Headline. I was ecstatic. It was the most semi-autobiographical book I have ever written.  I was advised to 'write what you know', and so the house on the original cover was the house I moved into at the age of seven. The book opens when Jane Travers was 11 in 1947. I wasn't born until 1949, but like her I was a scholarship girl, the only one on the sprawling estate I lived on to pass the 11 plus. Like Jane's mother, mine had a  cheque she had to pay in weekly, because the cost of the uniform and other required items came to nearly £100 -one hell of a lot of money for working class people in 1960! 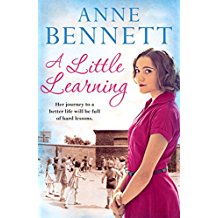 By then the government had built new grammar schools, although mine was only two years old, but before then private schools had to offer a quarter of their places to scholarship pupils.  My school was set in a middle-class area and most of the pupils were middle-class too. Scholarship kids from council estates were a race apart.  If I suffered discrimination, I could easily imagine what my Janet Travers was going through, and I had a very special feeling for her - my first heroine and the journey through the book she had to make.

It is over twenty years since I wrote this book and life is very different for me. I joined Harper Collins in 2001 and regained the ability to walk in 2006. A few years ago Harper Collins bought the rights for the books I originally wrote for Headline and are re-issuing my very first book this summer. Although the title stays the same, there is a new jacket cover. This shows my Jane all grown now and a teacher on playground duty.

A Little Learning will be released on the 24th August 2017 and hope you enjoy it!