Research On the Go - a fairy tale by Valerie-Anne Baglietto

...a woman of indeterminate age set off on a journey. This woman – with dark hair that was not entirely natural anymore, and dark eyes framed by black geeky glasses – was, and always had been, a Writer. The journey wasn’t as perilous as others she had embarked on, as it didn’t involve the M6; but the A49 proved eventful enough.

The cottage the Writer was staying in for a week had a wonderful, quirky name, yet she wouldn’t reveal it to anyone until her dying breath – or at least until it popped up in one of her novels. 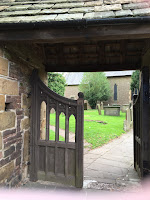 The detachment of being away from home lent a fresh perspective to her research. She found herself taking lots… and lots… of photographs with her phone. (Thank goodness for WiFi and that one terabyte of cloud drive, she realised, as she made sure to back them up daily.)

Now, oddly enough, the Writer lived in a picturesque village herself. But somehow, it was easy to be blind to sights she saw regularly. The saying “familiarity breeds contempt” didn’t seem so cliched when she considered how a never-before-seen vista can spark inspiration, or a new outlook lift a story up out of the grey and into a rainbow of light.

Trying to capture the essence of a place in a photograph wasn’t easy, the Writer discovered, especially with a phone case that made the edges of certain photographs blurry and pink. But it was worthwhile and fun. Viewing the typical settings of her stories with a fresh lens meant creativity was stirred and new scenes imagined. 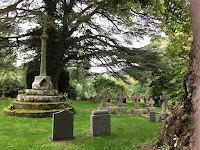 An old gate here (ooh, the possibilities of where it might lead!) or a pretty cottage. A crumbling, ancient gravestone remembering a tragic young life, or a war memorial marking the loss of so many others.

Without the infinite number of errands and chores she faced back home, it was uplifting. Only a finite number to tackle here. Such as feeding the dog. And the children. The writer might not be sitting at her desk slaving over her keyboard, but she was working, even while enjoying a break from the chains of deadlines or fitting in laundry (washing and hanging) between chapters. She was “on holiday”, and yet… she wasn’t. There was no need to feel guilty. She was free. Her mind was free. More importantly, inspiration was free – to run wild.

How fortunate Writers are these days, she thought, to be able to record their travels in pictures, storing them in albums on hard-drives or printing them out and pinning to study walls. Perhaps she would add her photographs to a Pinterest board. Or use a particular favourite as a screensaver. She would decide once she was home. There was no rush. No pressure. It was satisfying simply to be able to enjoy them and play games with the possibilities...

...a Writer went on a journey and finally returned home, if not with a tan (it was only the Forest of Dean, after all), then at least with a whole new village in her head.

By day, Valerie-Anne Baglietto writes contemporary, grown-up fiction. By night, she clears up after her husband and three children. Occasionally she sleeps. During her career so far she has written rom-coms for Hodder & Stoughton, won the Romantic Novelists’ Association New Writer’s Award and been shortlisted in the 2015 Love Stories Awards. Valerie-Anne tweets @VABaglietto