I’ve learnt so much from writing serials. Seeing the latest serial by my alter ego, Heather Pardoe, has reminded me just how much the techniques have helped me when writing my novels.

The art of writing of a serial is not to be underestimated. It has to be divided into parts, with enough characters and action to keep the story moving, while each part builds to a cliffhanger to leave the reader itching for the next part to arrive. Possibly not with quite the frenzy that greeted the climax of Charles Dickens’s The Old Curiosity Shop, but as near as. No one has yet stormed my local newsagent on the day of publication, but you never know …

You also have to keep the story moving evenly between the various sets of characters, so the reader doesn’t have time to forget or lose interest, and so keeps a vested interest in finding out all their fates. At the same time, the arc of the story must build, as in a novel, and the cliffhangers at the end of each episode need to build as well, ratcheting up the tension until you reach the final climax in the penultimate episode.

The final episode then has to resolve the story and tie up all the ends without leaving a sense of anti-climax. A lesson in exactly how not to do this is Thackery’s Vanity Fair, which was originally written as a serial. When I re-read the novel recently, I didn’t know whether to laugh or cringe at the final ‘episode’, when the author had clearly finished the story and absolutely and totally lost interest, but had a word count to fill (even Dickens and Thackeray wrote for filthy lucre) and was waffling shamelessly.

Funnily enough, although I studied Vanity Fair as part of my Literature degree, it wasn’t until I became a writer of serials that the damp squib of that ending made sense. Because I love Becky Sharp, I’m quite glad Thackeray’s half-hearted pontificating is more in the cause of money than good old Victorian pomposity! I’m still nervous when planning the final part of each of my own serials and the endings of my novels. It’s definitely a lesson I’ve taken to heart.

Most of all, I’ve found I go back to the lessons of serial writing when I’m telling a story from two different points of view in my novels, as in The White Camellia, published by Honno Press, which is told from the viewpoints of two very different women, linked only by a family feud they need to resolve. Balancing the two viewpoints, and maintaining the reader’s vested interest equally in Bea and Sybil, was something I found a real technical challenge. It was overcoming that challenge that made me understand just how invaluable I’ve found the lessons I’d learnt while writing serials like Together We Stand.

Writing a serial, which is on a smaller scale than a novel, is definitely an excellent way to practise the techniques of writing a page-turning story with the interest balanced between the characters – and I always get a childish kick out of actually getting my story illustrated! 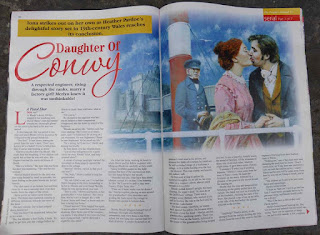 If you want to try writing a serial, you need to check out the market and follow the guidelines – they know their readers and exactly what they like. Magazines like The People’s Friend will work with you on a serial they feel has potential, and are very supportive and great to work with. They also have a huge readership, so are a good way to start getting your name out there.

Writing Serials for The People's Friend An excellent blog post from author Wendy Clarke, with tips on exactly what the magazine is looking for

Juliet is the author of three serials under the pen name ‘Heather Pardoe’, and has had three novels published by Honno Press. The first, ‘Eden’s Garden’, was a finalist for ‘The People’s Book Prize’, and the second ‘We That are Left’ was completed with the aid of a Literature Wales Writer’s Bursary. Both reached the top #5 in the UK Amazon kindle store. Her latest novel ‘The White Camellia’, is set in Edwardian Cornwall, with a crumbling mansion, a goldmine with a dark secret, and a long-running family feud. She would definitely like to turn that into a TV serial!

The White Camellia
We That Are Left
Eden's Garden