Novelista Annie Burrows went to the Romantic Novelists' Conference this year in Leeds, and gives her own, very personal, take on the event.

(Warning – this is looooong!)

This year’s conference of the Romantic Novelists' Association was held at Leeds Trinity University. 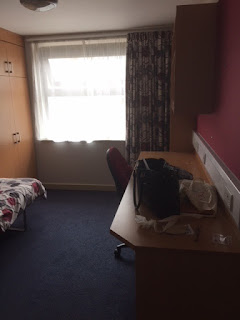 The first thing I did on arrival was send pictures of my room to my daughter, as I’d promised to keep in touch with her during the weekend.  A quick recce of the kitchen (plenty of gin and tonic in the fridge so I knew I was going to get on well with whoever was on my landing) and then it was off to the first talk.

“Building a Bestseller” by Sue Moorcroft.  Sue, and her agent, described in great detail how she went from moderate success writing with Choc Lit, to having an Amazon number one bestseller.  It was about halfway through the talk that I realised this wasn’t what I had expected.  Although it was very interesting, I had hoped to learn how to write a bestseller!

Next came a coffee break and the official welcome from Jan Jones, conference organiser, during which she advised us not to attempt using the safes in our student rooms. (Too late!  Both The Golfer and I had wrestled with ours, and accidentally locked them shut with no way of opening them again - fortunately without any valuables inside.) 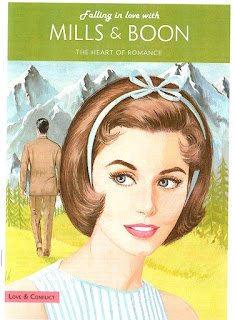 My second session was “Falling in Love – with Mills & Boon.”  And as it actually said on the programme, “followed by workshop”, I was prepared to do a bit of work.  After a short description of what editors are looking for in the various lines, and a quiz to determine which type of hero we would prefer to write, we split up into groups, to prepare an outline of the conflicts that might arise between a hero and heroine of whichever line the quiz put us, and think about how to show them falling in love with each other in spite of them.  Fortunately, I got mostly B’s, which put me in the historical group.

The first thing we had to decide was an era.  The lady next to me shouted Saxon!, and nobody saw any reason to argue, because straight away we could find a source of external conflict by having the hero a conquering Norman, and the heroine a defeated Saxon.  However, we then decided it would be a bit more interesting, if the hero could be a defeated Saxon, and the heroine a conquering Norman.  But how could we throw them together in a way that might cause them to see that they were uniquely suited to each other, in spite of the external conflicts arising from them being on opposing sides?  We’d just about decided to make Alaric (the Saxon hero) a groom employed by Elinor’s father, and send them on a journey to a convent where Elinor is going to take the veil rather than marry the man her father has chosen for her, when our time ran out.

I really, really hope somebody from our group writes that story, as I want to know how Elinor and Alaric can possibly find their happy ever after!

That was the end of the formal part of Friday.  It was back to the student hall of residence, where those of us in flat 6 got to know each other over gin and Pringles before going down to dinner.

On the way in I was grabbed by one of the Mills & Boon editors and plied with free wine.  Which was lovely, but after earlier intake of alcohol I found myself wilting over the pudding, and had to retire to bed before hearing who won the “tweet a story” competition. You can find all the entries by searching: #RNAConf18Love.

The next day I discovered the winner was Kate Johnson: “First, he broke hearts. Then he was hated. Then they laughed at him. But you can’t keep a good man down. They saw him console his enemy, they saw him win. And a nation fell in love. Some heroes wear capes; this one just needed the right waistcoat..."

Saturday dawned bright and hot… Fortunately I had packed an electric fan, which had been wafting the air in my student bedroom round, keeping me relatively cool all night.  It had also drowned out the noise of the aircraft coming into land at Leeds Bradford Airport, which was about a mile away.  (Or possibly more.  Perhaps it only sounded as though it was a mile away.)

I was a bit late into the first session, “Breathing life into historical characters”, because The Golfer had a tee-time emergency which required a lot of emailing and phoning round to get him onto an alternative course.  And so I’m still not sure which speaker was Carol McGrath and which was Charlotte Betts.  However, after listening to how the speaker became interested in what happened to people after the fire of London, and hearing her vivid description of the spice warehouses burning, shooting out flames of various colours, I really need to read The Spice Merchant’s Wife by Charlotte Betts.

Saturday’s second session (for me) was given by Alison May, and was about self-editing.  Alison is a really entertaining speaker.  Not only that, but I wrote pages of notes which I will apply next time I’m editing my manuscript.  But, glancing back through them, I can see that what I’ve printed in capitals, and underlined twice, is the title of her next book, which I really want to read, having listened to her speak. All That Was Lost is (available from Amazon from 6th Sept).

Last morning session was given by Fiona Harper, and called “Romance Structure – how three-act structure applies to love stories”.  And that description was spot on.  Again, I have pages of notes about applying a three act structure to a story, with appropriate turning points.  And again, in capital letters, and underlined, are the titles of two more books I want to buy!  Story Trumps Structure by Steve James and The Memory Collector by Fiona Harper.

At lunch time came my favourite moment of the entire conference.  An as-yet-unpublished-writer I 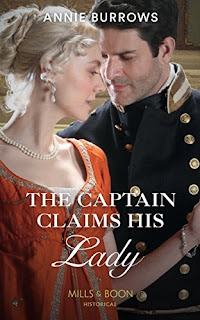 sat next to made my day by saying that I didn’t look old enough to be a grandmother.  And then trumped that by giving a very flattering opinion about people who write for Mills & Boon. (I gave her a signed copy of my latest release, naturally.)

However, she then proved that I am not as fantastic as I’d like to think, by telling me all about the session she’d attended that morning, about pitching a story.  It was, apparently, the first part of the session I was about to attend, “Writing a Synopsis.”  Had I read my conference notes properly (or at all) I would have seen that I was supposed to have attended both parts, as they were really one 2 hour lecture chopped into two bits.  Also, the speaker, Debbie Taylor, meant this synopsis to be the kind of thing to send to a publisher after having completed a story, as part of a pitch to publishers and editors, NOT as an outline of what you intend to write, which was what I wanted to learn how to do.  Because, even though I have now had 27 books published, I still find writing a synopsis extremely hard.  I brought two things out of that session.  The first was the heartening news that agents often take little notice of a synopsis, because so many authors are so bad at writing them, (yay!  I’m not alone!). The second, from the workshop part of the session, was a one-line character description of my hero which I am definitely going to include in the synopsis I will send into my editor:

“Thomas Norrington, handsome, fair-haired Marquess of Devizes, can persuade just about any woman into his bed with one lazy smile.”

The last talk I attended on Saturday was “Truth can be stranger than fiction…Barbara Erskine in conversation with Nicola Cornick.”  Once again, in my notes, I have the title of Barbara’s next book underlined and in block capitals.  However, after hearing Barbara describe how she lived in a house where she saw a ghost child sitting on the stairs crying, and how various members of her family had psychic links with each other I changed my mind about buying it. The Ghost Tree sounds like the kind of thing that would give me nightmares! 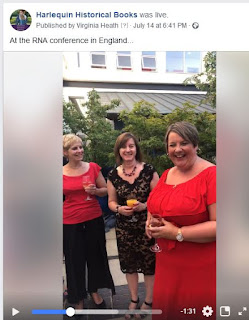 I then had to spend some time getting glammed up for the gala dinner, especially as the historical writers for Mills & Boon who were attending had already agreed to do a Facebook video for the Harlequin Historical books page.  You can view that here. And note that I am virtuously drinking orange juice, rather than bubbly, since I had already partaken of…no, not gin this time, but Lemsip.

The meal was lovely, the company even better, and at the end of the meal, the winner of the Elizabeth Goudge Trophy was announced. Elisabeth Hobbes, fellow historical writer for Mills & Boon, captivated the judges with an opening for a story titled, The Child from the Sea.

Sunday morning I emerged rather bleary-eyed after a sleepless night due to throbbing sinuses, in spite of the Lemsip, although it had given me a chance to start reading one of the books I found in my goody bag, Single for the Summer by Mandy Baggot.

The first session after breakfast and packing all my stuff and running it to the car, was aptly named “Emotional Resilience for Writers”.  Andrew Cornick, who has worked as a psychotherapist for the NHS (by this time I had read the background notes about who was giving the talks and what they were actually talking about), gave some very useful hints about maintaining mental wellbeing.  I will remember, in particular, his description of NATs (negative automatic thoughts) because I had been bitten the night before, (I sat as near to the doors as I could, to get a cool breeze.  Unfortunately along with the breeze, came various flying insects) and spent a lot of his talk scratching the gnat bites.

After coffee break, it was in to “The Bestseller Experiment” a talk given by Mark Stay about how he and a friend decided to write a book together and get it to the top of the kindle charts within a year.  Nothing he said will be of any use to me, I shouldn’t think, but it was a very amusing session, and, once again, I want to read the book he wrote, Back to Reality by Mark Stay and Mark Oliver. 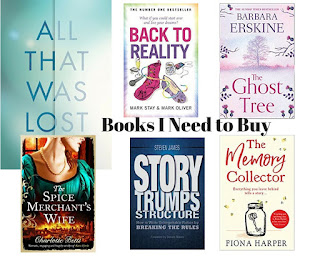 And finally, my last session of the conference, which was called “Word Wenches – two nations, one language of romance?”  The Word Wenches blog is one of the longest-running author collaboration blogs on the web. And it was fascinating to hear the take on the state of publishing both in the US and the UK from such talented and experienced writers.  Who didn’t agree on everything, and were comfortable enough with each other to say so!  My takeaway from that session – “There is an audience for everything.  You just need to find it.”

Lesson One: Read the accompanying leaflet describing the talks in detail.  Don’t just choose the talks on the title alone.

Lesson Two: Do not attempt to lock anything away in a safe before reading the instructions.

Lesson Three: Do not mix gin and Lemsip

Lesson Four: If sitting next to an open door at night, first spray self liberally with insect repellent.

Lesson Five: Do not enter a raffle for an enormous gift basket if you are going home on the train.
Posted by annie burrows at 14:21