Two weeks ago I attended the annual literary festival known as ‘Gladfest’ at Gladstone’s Library in Hawarden, North Wales. A mix of informal chats, talks, readings, and workshops, the speakers this year included Joanna Cannon (The Trouble with Goats and Sheep), Sarah Perry (The Essex Serpent), Miranda Kaufmann (The Black Tudors) and Lucy Mangan (Bookworm: A Memoir of Childhood Reading). The festival started on Friday evening and lasted until late on Sunday afternoon.

Although the festival is mainly aimed at readers, some of the authors offered tips for would-be writers. In particular, Joanna Cannon spoke at length about her working day and how she became published, and I thought readers of this blog would be interested in what she had to share. As I didn’t take written notes, I have paraphrased. 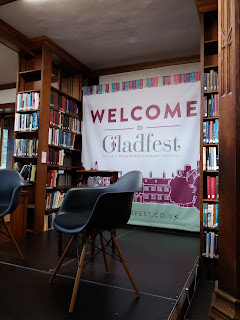 Joanna tries to avoid giving writing advice. In fact, she jokingly said that her writing advice would be to never give writing advice! She never dreamt her books would be so successful and she finds it mind-blowing that her books have been translated and are available in countries all over the world.

She likes to write about characters that would ordinarily be overlooked in society. Her writing day starts at 3.00 am (it's deliberate! She finds she works better that way), when she walks her dog across the fields near her home and thinks about the story she’s writing. She doesn’t plan her books. She has a vague idea of what is going to happen and how the story will end. She writes about 1,000 words a day, reading back over what she has written the day before and editing it before writing something new. Rather than writing a rough first draft, she writes and polishes as she goes along. She doesn’t have a study but prefers to move from sofa to sofa around her house.

When Joanna wrote her first novel she wrote it for herself, never believing it would go on to be so successful, or that people would start analysing it – or that American publishers would want to change her words and characters to suit an American audience! When she wrote her second novel she made the mistake of wondering how others would judge her work and if readers from other countries would understand what she was trying to say, and she found this really stifled her creativity. The way she moved past that was to realise you have to write your story the way you want to write it. It has to be your story, that only you can tell. If readers like it, that's great, but she now accepts you can never please everyone all the time.

Joanna’s first book, The Trouble with Goats and Sheep, was published after she attended a writing conference. She had no idea if her writing was any good, so she entered a competition where writers had to read the first 500 words of their book aloud to a room of publishing professionals. She won, and by Monday had offers of representation from seven literary agents. A few weeks later she had a publishing contract.

Joanna admits to reading her reviews, good and bad, and says that as a writer you do have to laugh sometimes at the one star ones. For example, in her first book, set firmly in 1970s England, one of her readers had been disappointed that there was no mention of Battenberg cake. So she made sure it was in the second book, joking that she knew at least one reader would be happy!

She has the voices of the characters in her head before she starts writing and tries to find something to pull the reader into the story, to make them keep reading. As a reader, she’s a sucker for books that have a secret. Although her books have been labelled ‘uplit’ by the media, personally she enjoys reading dark, twisty thrillers. And as she tends to skip any kissing scenes, there is no kissing in any of her books!

If you'd like to listen to Joanna's talk yourself, it is available via SoundCloud here for another two weeks.

The talks by some of the other authors can also be heard on SoundCloud here.