Getting on the gladrags...


On the first Friday of the month, Novelista Annie Burrows shares insights into the life of a writer - alphabetically.  This month she has reached G is for...Getting on the gladrags

Most of my time is spent sitting in my study, typing away on my laptop.  But very occasionally, I get to go out and do something amazing - because I've become an author.

A couple of weeks ago, for instance, I painted my nails silver, got all dressed up, and went out to the AMBA (Association of Mills & Boon Authors) lunch.  I even booked a seat in a first class carriage, where I was plied with various snacks and drinks all the way to London.

I met up (accidentally) with two other historical authors on the tube train, and together we made for the Charing Cross Hotel.

Then it was drinks in the bar with more of the historical team, followed by the lunch itself.  A three course masterpiece.

I was sitting in between Claire Thornton, author of a fabulous trilogy set during the Great Fire of London, and the RITA award-winning Sarah Morgan.

Also at my table was Facebook friend and fellow Strictly fan Kate Hardy.

There was a brief lull after speeches from the managing director of Harlequin UK, Tim Cooper, during which Sarah Mallory, Louise Allen and I invaded the Virgin lounge in Eagle Place. It gave us time to discuss strategy for the launch of our own trilogy next year, which will come out to coincide with the 200th anniversary of the Battle of
Waterloo.

Then it was off to the Meridien on Picadilly for the "Author Toast", hosted by the publishers, where authors Julia James and Chantelle Shaw were awarded Tiffany pins for publishing 25 stories apiece. 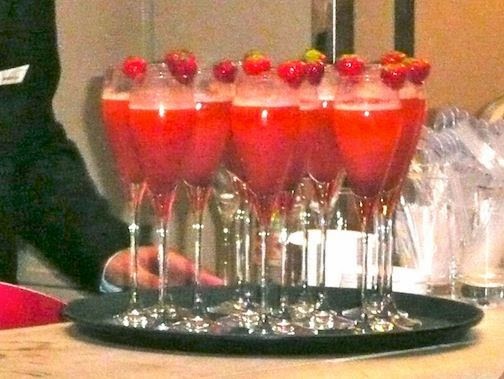 I drank two Rossini's, which have become my favourite cocktail, before dashing across London to get my train home.
I didn't have a seat booked, which meant I had to join the 300 m sprint for the one carriage which wasn't full, when the gate opened.

Talk about coming back down to earth with a bump!
Posted by annie burrows at 14:49