Where I Write by June Francis 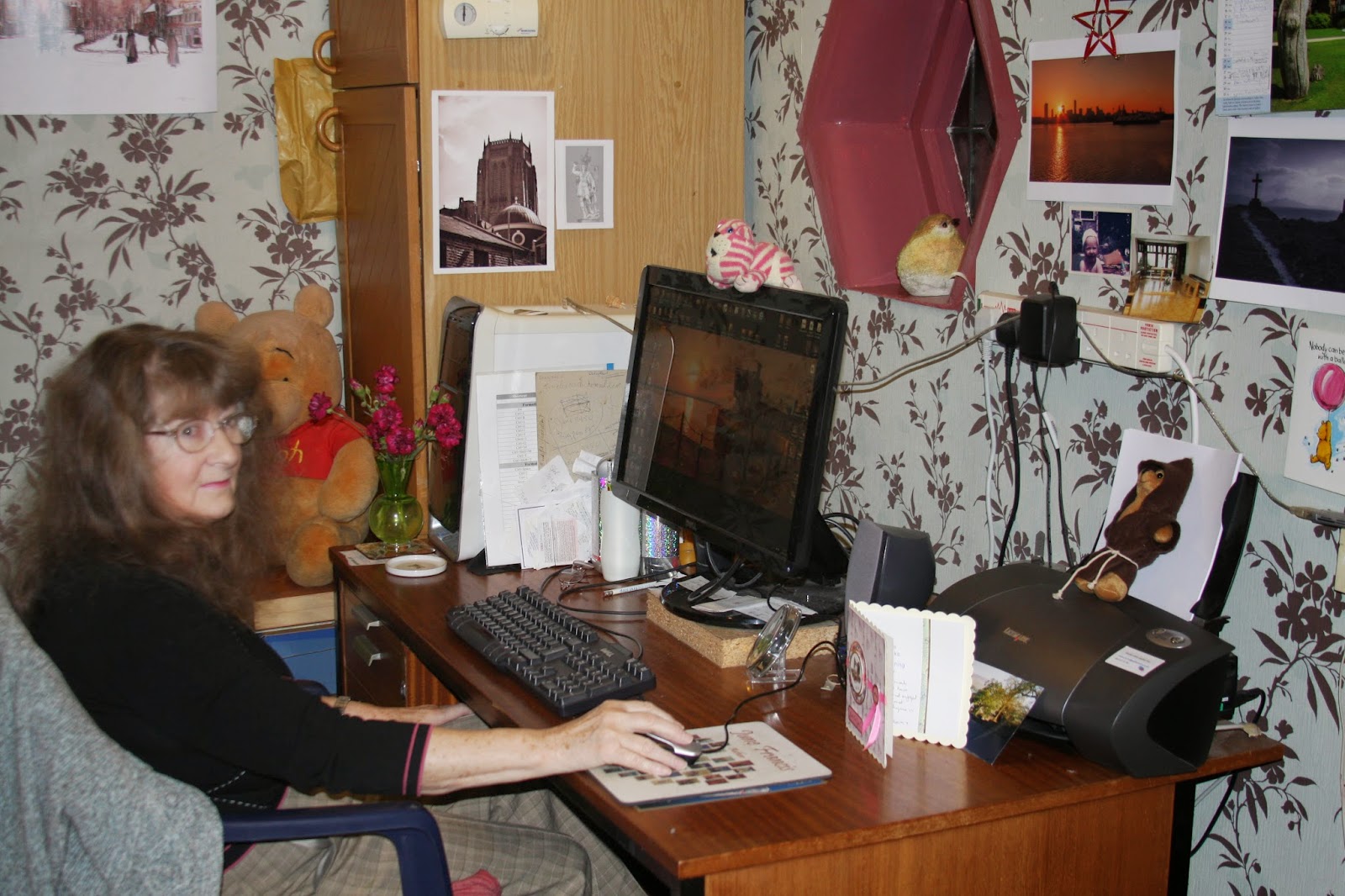 When I first started writing I had dreams of one day having a room of my own. That was well over thirty years ago and I can still only lay claim to a corner of mine and my husband’s bedroom. The wallpaper might have changed but I have the same old desk my husband bought me when I blurted out that I wanted to have a go at making a career out of writing.

I’ve been grateful ever since that he didn’t laugh in my face. Instead he bought me a second hand desk in a sale of office furniture and it has proved its worth ever since. It is scratched and some of the veneer has worn off in places but it’s a decent size and has one of those trays than can be pulled out to hold a cup of tea and a plate of Jaffa cakes. I wouldn’t exchange my desk for a modern one if one was gifted to me. We’ve been through a lot of writing hours together.

What has changed is the old manual typewriters on which I wrote my first attempts at being published: articles that were eventually published in My Weekly, as well as my first five novels. Alas, the typewriters have gone and were replaced by an Amstrad on which I managed to write a 80,000 word historical romance in six weeks. A one off! On average it takes me six to nine months to write a novel. This was true even when I moved on to the Dell WP with internet access that Pooh bear likes to sit at and pretend to be a writer.

It was my son Tim who persuaded me that I deserved a flat screen Dell computer. I instantly fell in love with it. Not only because I can watch my favourite films, such as Enchanted April and Letters to Juliet in High Definition when I feel like escaping pages of typescript which I am convinced nobody will want to read, but because the flat screen means I’ve more room on my desk for those bits and bobs that I like to have around. A lovely homemade thank you card from a friend who has just read my latest book, It's Now or Never, a glass paperweight presented to me by Crosby Writers’ Club, and a shell and shiny stone from Anglesey, which I like to hold and stroke when I feel fraught. It goes without saying that there is a container of pens and pencils, and a couple of speakers for when I indulge myself listening to Russell Watson or some Gregorian chants.

I have various photographs too. The one of my parents always makes me smile because it was taken in the fifties while on a camping holiday in North Wales. Mam is wearing a wide belt which I remember being red patent leather. Happy Days.

The view through my six-sided little window is of a chimney pot on which seagulls, pigeons and magpies take turns to perch and view the scenery.

Under my desk is a plastic container full of writing memorabilia, such as Piatkus catalogues featuring my earlier sagas and a book containing old newspaper cuttings featuring book reviews and interviews with me. Last, but not least, are the files containing photographs and information to do with my ancestry research.


Much that is precious and sacred to me is held in this small space. It is also here that I have my quiet time where I meditate. There isn’t room for all my books but I haven’t quite given up hope yet of having a room of my own. One of my sons has gone travelling and his room is just across the landing…

Email ThisBlogThis!Share to TwitterShare to FacebookShare to Pinterest
Labels: June Francis, Where I Write, writers, writing