You’d have thought that having attended 6 RNA conferences they would all blend into one, but this year’s was truly memorable, partly because of the journey getting there!

The venue was Queen Mary University of London, and I booked early because an Industry Day was planned for the Friday at which publishers and agents would be taking part in panel discussions and one-to-one appointments (which I blogged about last year). Unfortunately, a tube strike put paid to my plans and turned the journey from Euston into an unwelcome adventure! The taxi I’d booked didn’t turn up, the 205 buses were all full, and the walking route I’d got from the internet wasn’t much use without my Google maps app which wouldn’t cooperate! 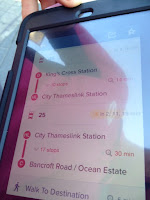 Fortunately, a very lovely man at King’s Cross station spotted me looking lost and gave me an alternative bus route which got me to QMU 3 hours late but just in time for dinner (thank you so much, Mr Anonymous!).

The Industry Day was well worth the journey, though, and I got a mine of information from it. First up on the agenda was an Agents’ Panel, How Can Agents Help You? chaired by Carole Blake, and with Tim Bates, Lisa Eveleigh, Hannah Ferguson and Caroline Sheldon.

They were asked how much they edit their clients’ work and the answers were fascinating. Caroline, who previously worked as an editor, initially works with her authors to improve pace and characters but then hands over to the editor. Hannah also gets the book into the best possible shape before sending it to the editor, then takes a back seat. Tim warned that whatever work an author is required to do initially, this will be easy compared to future edits because, as an author’s career progresses, their editor will push to develop them.

And once an author has signed, what can they expect an agent to do for them? Lisa sees her role as to negotiate the best possible terms for her client – not necessarily the biggest advance, but also foreign and film rights, large print etc… Hannah finds that she often has to stand firm because authors can be keen to accept any contract, whereas she takes a long-term view of their best interests. Agents spend around 30% of their time doing editorial work, and 70% taking care of the business side.

After lunch was an Editors’ Panel, The Changing Role of Editors, with Gillian Green (Ebury), Anna Baggaley (Harlequin), Catherine Burke (Sphere) and chaired by Jane Johnson (Harper Collins). Editors' roles have changed dramatically over the last decade or so, along with the publishing industry as a whole.

Asked what they were currently looking for, the editors agreed that they want realistic characters, dialogue and description. Anna looks for something that hooks her. Gillian needs a strong elevator pitch to sell the book to her sales & marketing teams (eg, the book Martian’s pitch was “Robinson Crusoe on Mars”). Jane sometimes feels passionately about a book though it isn’t always clear how to sell it – and these novels, she said, are usually the bestsellers.

Anna wants women’s fiction that you can’t put down, Richard & Judy list-style books, Young Adult for a 12+ audience. Gillian also looks for Richard & Judy books, crossover sci-fi/mainstream, and Catherine wants books which can sell through supermarkets, strong stories with an instant hook because you have a 3-second window of decision when customers are choosing a book. It was agreed that nowadays genre fiction needs a unique selling point (USP), and authors have to be doing something fresh with a tried format.
This was my first conference as a published writer (a very special feeling and one I won’t forget!), and at the end of the first day my publisher generously hosted a Pimms party by the canal where I met fellow Accent Press authors and the RNA chairman, Katie Fforde (I was a bit starstruck!).


As always with RNA conferences, I made lots of new friends, including those just starting out in their writing careers. Some seemed a little awed by the set-backs that the journey necessarily involves: the rejections, the failure to place in competitions, critical feedback which has to be taken on the chin (all this still happens when you’re published!). My advice?
Think of it as making a journey during a tube strike! No matter how prepared you are there will be obstacles, but there will also be kind and generous people around to help you (for me, there have been so many it's impossible to list them all but many belong to the RNA - and, of course, the Novelistas!). And if you’re determined to reach your destination, I truly believe you will get there in the end.